By the way, the annual four-day arts festival in Ft Worth, TX, to be held this weekend, was canceled ... due .. to ... winter storm.

We all follow TSLA pretty closely. The craziness of investors ... and investing.

Boeing: incredibly bad news in the past two six months -- 737 Max 8 -- 346 deaths -- their plane of the future -- customers canceling orders -- Airbus close on Boeing's heels -- company cutting back on 737 Max 8 production -- expect to be back in service not sooner than August, 2019 ... and shares are trading higher than they were prior to all this bad news. Boeing pays 2%. 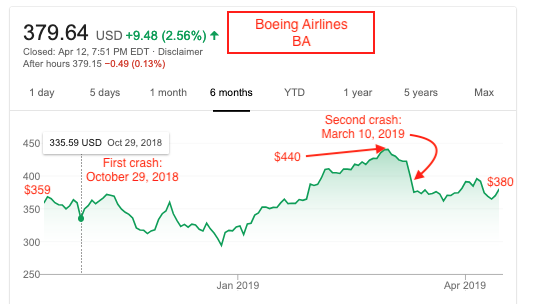 Meanwhile, Chevron Corp announces a huge deal that should excite its investors, attempting to "steal" a top shale oil company, and may not have to raise much debt to close the deal. Following the announcement, CVX drops five percent. CVX pays 4%. See this short CNBC video. 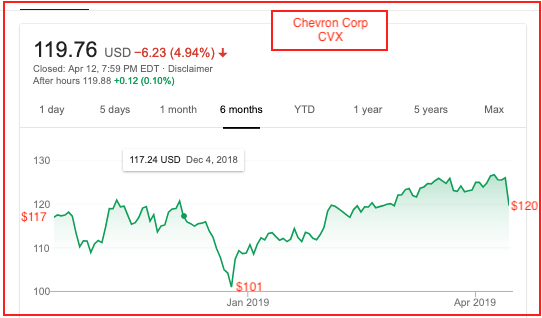 Some excerpts from the linked Bloomberg article at Investor Village:


At $33 billion, Chevron Corp.’s acquisition of Anadarko Petroleum Corp. is something of a bargain, according to investors.

Chevron was punished nonetheless. The shares began declining as soon as the transaction was announced at 6 a.m. New York time on Friday and were down 5.3 percent to $119.35 at 3:45 p.m. Anadarko soared 32 percent.

The $65-a-share offer for Anadarko represents a 39 percent premium to Thursday’s price, but the stock traded at about $77 less than a year ago. The deal values Anadarko at only about about 7.5 times its earnings, compared with an average of 8.9 for comparable deals.

“I don’t necessarily feel like they overpaid even with the premium embedded in the deal,” said Noah Barrett, who helps manage $328 billion at Janus Capital Management in Denver. Chevron is “getting good assets at a fairly reasonable price.”

Like other U.S. explorers, Anadarko had been punished by investors for participating in a shale boom that has delivered record crude production but little in the way of cash returns. Its wide range of assets from the Permian Basin to the Gulf of Mexico and Mozambique left investors exposed to a multitude of risks in the global oil market.

Its Colorado operations, meanwhile, were devalued due to a state crackdown on oil and gas drilling.

Most important takeaway in all of this: Colorado.


Occidental Petroleum Corp. made a $70-per-share offer for Anadarko, according to a person familiar with the matter. But the deal would have been tougher for Occidental to pull off than for Chevron given its smaller size and narrower range of upstream expertise, potentially dragging down its share price.