May 31, 2019, T+50: this will get their attention. Trump slaps 5% tariff on Mexico and will increase the tariffs to 25% by October, 2019, if Mexico doesn't make meaningful progress in stopping the "southern surge."

May 30, 2019, T+49: it's obvious that Hillary is running for the Democratic nomination for president. There will be three phases: a) the phase she is in now; public speaking; attacking only Trump; not attacking the Democratic frontrunner(s); b) the anonymous attack dog phase -- when mainstream media starts attacking the frontrunner(s) -- the faux press releases will come from some organization that can't be traced back to Hillary; c) the open attack on the Democratic frontrunner(s). All this has to happen over the next twelve months; expect the first two phases to last for eleven months or so; the final phase will begin just before the DNC convention next summer.

May 27, 2019, T+46: Biden is nowhere in the news; he is laying low. Tea leaves suggest he could lose support after his initial "honeymoon." It could become a shoot-out among Pocahontas, Kamala Harris (who is loved by the media), Buttigieg (also loved by the media). Beto could pick up a few points at Biden-Bernie's expense but he's a non-entity. Still, no one is talking about Hillary or polling voters on Hillary. She is attending too many high-profile events to suggests she has not ruled out another run. I think she's a player. Polls have not been updated since May 20, 2019.

May 26, 2019, T+45: Jon Voigt is woke. Voight declares Trump is the greatest president since Abraham Lincoln. I agree.

May 25, 2019, T+44: Brennan, Clapper call it "outrageous" that Trump / Barr will declassify "intelligence" reports that said Trump colluded with the Russians. I find it somewhat amazing that Mueller didn't complete the job -- once he determined there was no collusion, to investigate how it all started; who started it.

May 24, 2019, T+43: more impeachment talk. Trump's "executive orders" continue to be shut down by Obama-appointed federal judges. China trade talks going nowhere. Brexit breaks Theresa: she tearfully announced her resignation. Set date for new elections -- just a couple of weeks from now. Tea leaves suggest it could be the worse upset, most lopsided vote in the history of England. I had forgotten she had voted against Brexit. No wonder things went so badly. One GOP representative stopped the $19-billion relief and recovery package for al the flooding in the US and the hurricane damage to Puerto Rico years ago. Interesting, interesting story: remember -- Nancy Pelosi controls the US House; this was a bill that was almost unanimously passed by the US Senate -- and one US representative stopped it.

May 22, 2019, T+41: Notre Dame, IN, the home of the University of Notre Dame, for all intents and purposes is a suburb of South Bend, IN. One would assume much of Buggigieg's support comes from "locals." The fact that he endorsed post-birth abortions and late third-trimester abortions (to include homicide following a failed abortion) -- as enacted by New York state -- may have been the Rubicon he should not have crossed. He already admitted a huge mis-step when coming out against childhood vaccines. It will be interesting to see whether his polling numbers have peaked.

May 19, 2019, T+38: quiet. In polling, Biden widens lead slightly over Bernie. Biden stays the same but Bernie drops. Kamala up slightly. Buttigieg up slightly. Dream ticket: Biden/Buttigieg or Biden/Kamala. Decisions, decisions. Beto drops below 4%. Apparently live-streaming his haircut/massage did not play well. Apparently he was born, not to be president, but to have his daily mundane activities streamed live. LOL.

May 17, 2019, T+36:  The University of Michigan’s preliminary print on its consumer sentiment index rose to 102.4, up from 97.2 in April and well ahead of expectations. The reading was the highest in 15 years. The last time the reading was this high was in 2004 -- before the Obama administration.

May 16, 2019, T+35: apparently the Dems are falling in line behind Pelosi -- stop all this talk about impeachment. If so, it looks like Hillary's star is fading; Hillary lost the battle. It also looks like Comey will be the fall guy (as noted earlier). As more and more of this comes out, there may be a reason the Dems are starting to re-assess.

May 15, 2019, T+34: panic sets in among Comey, Clapper, McCabe, Brennan as Barr (US Attorney General) sets sights on fake Steele dossier and spying (or surveillance) on Trump campaign. A silent coup. Comey may end up being the fall guy: In a statement to Fox News, a former CIA official put the blame squarely on Comey.

May 14, 2019, T+33: if Mueller is hesitant to talk before Congress, there may be a reason. There is now an active investigation into the original report that started everything. The original report was known to be bogus as soon as Mueller got it but he spent two years investigating.  Mueller may get the chance to testify under oath before this is all over.

May 10, 2019, T+29: Rudy Giuliani, Trump's personal lawyer, now plans to "collude" with the Ukrainians. And will share what he finds with the American public. LOL.

May 9, 2019, T+28: Still waiting for the US House to find Attorney General Barr in contempt of Congress. I still think he should call their bluff, plead guilty, and spend a few years resting, enjoying life.

May 5, 2019, T+24: after recent meeting with Putin, Kim fires off a few missiles. Trump says Kim would not go back on his word. I think Trump is being played. Sunday evening futures plunge: Dow off almost 400 points. S&P 500 down 40 points.

May 4, 2019, T+23: Kentucky Derby with 19 horses. Twenty horses are selected to run each year; one horse scratched within 24 hours of the start. Very, very "sloppy" race track. Muddy. But the rain has stopped. 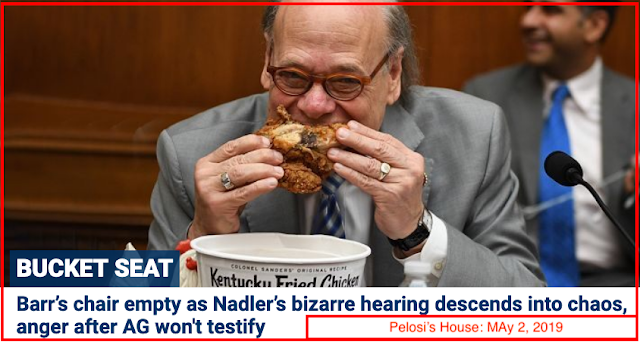 May 1, 2019, T+20: In midst of greatest measles outbreak in two decades, Buttigieg says he supports vaccine exemptions based on personal beliefs. 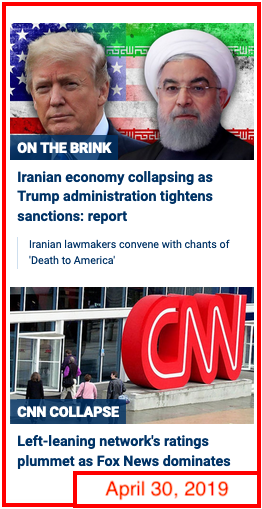 April 28, 2019, T+16: this is not a political comment, just an observation. The best the Democrat party can do to take on Trump, is a 78-year-old white male who has run for president three times, or maybe seven times, depending on how one counts. Regardless, this is the best the country has to offer? But then again, a peanut farmer who took advice on nuclear disarmament from his 11-year-old daughter won the oval office some years ago. I guess nothing should surprise us any more.

April 26, 2019, T+14: I was waiting to see if anyone noted the timing. It takes a few days to "reserve" one's spot in the op-ed of any newspaper. It was telegraphed that Joe Biden would announce his candidacy on Thursday, April 25, 2019, yesterday. Hold that thought. He made his announcement at oh-dark-thirty via a video which was released at the very same time the morning edition of the Washington Post was being delivered. And on the very day that Biden announced his candidacy, Hillary Clinton has her op-ed in the Washington Post.

April 25, 2019, T+13: Joe Biden, in a video aired at oh-dark-thirty, announces he will "definitely" run for president. His only policy statement: to run against Trump and making American great again. Say what you want, but this sounds like a woman who wants to jump back into the race:


Clinton continued in the piece to call on Congress to “hold substantive hearings that build on the Mueller report and fill in its gaps,” and said the country needs “clear-eyed patriotism, not reflexive partisanship.” [After all, only she can provide that "clear-eyed patriotism."]


April 24, 2019, T+12: at some point, folks need to call out Bernie Sanders. It's one thing to be a communist/socialist, but supporting the "Marathon Bomber's" right to vote is beyond the pale. Kamala Harris, when asked the same question, agreed with Bernie before she began to walk that back. I had not heard her speak before in a town meeting venue. She sounded drunk or perhaps on medication. Having said that, this is an opportunity for Biden to put Bernie Sanders out to pasture. Biden can completely ignore the "felon's right to vote" issue but simply say the "Marathon Bomber will never be given the right to vote."

April 22, 2019, T+10: over on Twitter, I quit following President Trump the re-tweets were becoming unbearable. My whole Twitter feed was becoming one big political feed. I will probably un-follow an oil analyst -- same problem -- tweets too often and uses all "CAPS."

April 19, 2019, T+7: Mueller investigation. Mainstream media shocked that President Trump took the investigation so seriously, got so upset over the witch hunt. Is that politically correct? "A witch hunt."

April 17, 2019, T+5: Everyone is upset that the attorney general brief his boss before he briefed Congress. LOL.

April 16, 2019, T+4: Hillary Clinton pledged to put a lot of coal miners out of work; she lost the election. Pocahontas, a millionaire and no need to worry about work, pledges to put a lot of oil and gas workers on the dole.

April 14, 2019, T+2: 102nd day of the 115th US Congress. US House concerned that IRS not doing its job auditing Trump's tax returns -- one of the reasons they want his tax filings released. LOL. Tell me again that Lois Lerner did not take a look at those tax filings, and pass any concerning information to her boss. This all reminds me again how much "deep state" Trump was fighting when he won.

The first hundred days of the 115th US Congress are linked here.
Posted by Bruce Oksol at 11:12 AM