I can't take credit for this; another reader noted:

Detroit temperatures (weather) can have a 120-degree spread over six months and the grid does just fine.

But, the Detroit Grid, apparently can't handle a rise in global temperature of 1.7 degrees over the next 100 years. Already experiencing blackouts. The "journalist" apparently missed the London blackout story last week and the wind turbine debacle at the Minnesota VA facility this week.


The winter of 1776-1777 and the early spring at Morristown (NJ), though less famous than the ordeal at Valley Forge the following year, were a time of similar privation and suffering for the Continental Army.

However, Washington had chosen a naturally strong position surrounded by hills and forest, and by sending his men out to ambush and rob British foraging parties, he kept his greatly diminished force alive while Cornwallis remained nervously on the defensive. By spreading false reports about his troop strength, Washington also duped the British into believing he had far more than the five incomplete regiments at his disposal.

With 10,000 fully equipped professional troops only a day's march from the American camp, the British might have wiped out Washington's forces. Instead, Alexander Hamilton confirmed in more elegant prose the "extraordinary spectacle of a powerful army straitened within narrow limits by the phantom of a military force and  never permitted to transgress those limits with impunity."

For all the lip service officers give regarding the importance of reading military history while attening Army War College it appears to be just that -- reading it but not learning from it. Wow, one just wonders how many weeks senior officers studied the Revolutionary War.

The footnotes in The Battle For New York: The City at the Heart of the American Revolution, Barnet Schecter, c. 2002, are among the best I've seen in any book. It was nice to see them at the bottom of the page instead of at the back of the book which would have required endless back-and-forth page turning.


"Brooklyn" is the anglicized spelling and pronunciation of breukelen, a Dutch word meaning "marshland" [or swamp]. Soft and spongy because it was the bed of a valley, the ground received the runoff from the surrounding hills. Gowanus Creek was a snaking tidal inlet that penetrated the peninsula from Gowanus Cove and was surrounded by an extensive marsh. Local farmers supplemented their diet and incomes by harvesting oysters from the creek, and the otion of the tieds worked the ills that were built along its course.

The reason I bought this book was because I wanted to learn more about the geography -- particularly the waterways in and around NYC. It has turned out to be an incredible book. It might be a bit drier reading than Nathaniel Philbrick who covered the same history in Valiant Ambition but Barnet Schecter certainly was much more comprehensive. If one has time to read both, read Philbrick first and then Schecter. Philbrick's Valiant Ambition was a biography of Benedict Arnold. Schecter's book was a biography of NYC during the Revolutionary War.

Okay, one last one and then I will quit. Spuyten Duyvil: link here. Apparently it's since been filled in but the area still carries the name:


Spuyten Duyvil Creek is a short tidal estuary in New York City connecting the Hudson River to the Harlem River Ship Canal and then on to the Harlem River. The confluence of the three water bodies separate the island of Manhattan from the Bronx and the rest of the mainland. 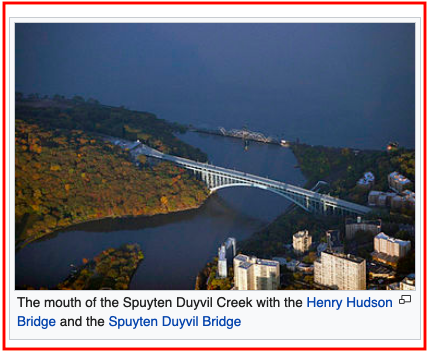 Beautiful, huh? "C Rock"? See this post, or google it yourself.

If I have any of the annotations wrong, I'm sure a reader will correct me: 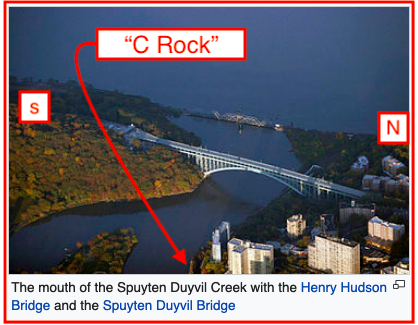 Email ThisBlogThis!Share to TwitterShare to FacebookShare to Pinterest
Labels: Insanity_Definition