Disclaimer: this is not an investment site. Do not many investment, financial, job, travel, or relationship decisions based on what you read here or think you may have read here.

Later, 6:06 p.m. Central Time: shale natural gas revolution began earlier, but the US shale crude oil revolution began in Montana in 2000, but the real boom began in 2007 in the Bakken, followed by the Eagle Ford and the Permian some years later. So, drawing a line from 2007 to the present, debt is now back to what it was when the boom was just beginning. Who's to say, whether the equity/debt ratio is the bigger story or whether the incredible decline in debt is the bigger issue? The decline in debt is not subtle; it's a huge decline and despite that huge decline in debt, shale production is literally setting records every month. 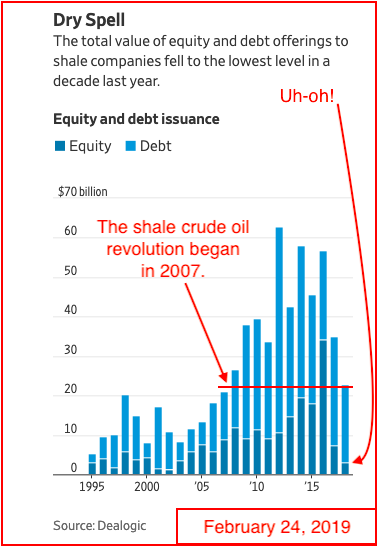 The once-powerful partnership between fracking companies and Wall Street is fraying as the industry struggles to attract investors after nearly a decade of losing money.

Frequent infusions of Wall Street capital have sustained the U.S. shale boom. But that largess is running out. New bond and equity deals have dwindled to the lowest level since 2007. Companies raised about $22 billion from equity and debt financing in 2018, less than half the total in 2016 and almost one-third of what they raised in 2012.

The loss of that lifeline is forcing shale companies—which have helped to turn the U.S. into an energy superpower—to reduce spending and face the prospect of slower growth. More than a dozen companies have announced spending reductions so far this year, even as crude-oil prices have rallied more than 20% from December lows. More are expected to tighten budgets as they release earnings in coming weeks.

Wall Street support allowed shale companies to persevere through a plunge in oil prices that began in 2014, eventually helping the U.S. surpass Saudi Arabia and Russia as the world’s largest producer of oil, with 11.9 million barrels a day in November, according to the U.S. Energy Information Administration. 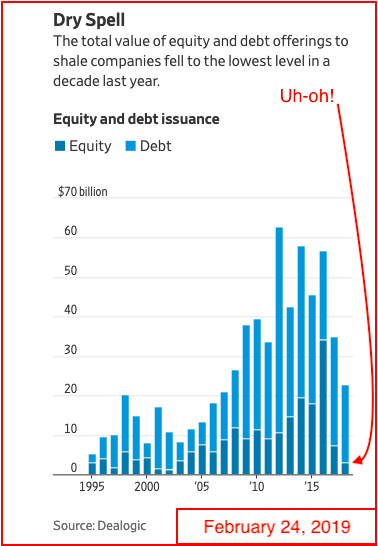