German-based Bayer AG has committed to President-elect Donald Trump that it will invest $8 billion in American research and development as part of its deal to acquire Monsanto, Trump's transition team said Tuesday.
Incoming White House press secretary Sean Spicer told reporters that Bayer will also protect all of Monsanto's 9,000 American jobs while creating an additional 3,000 high-tech positions in the country. That agreement, he added, came after Trump met with CEOs from both companies last week. 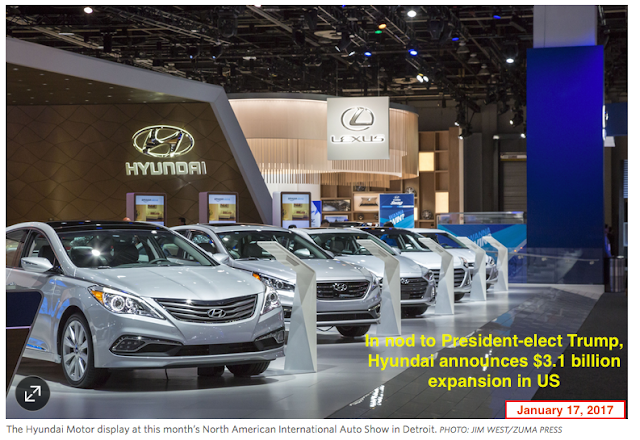 Meets, exceeds federal minimum wage; great career path for those with demonstrated skills.
Investment not noted in the screenshot: the investment will also add up to 24,000 new (temporary) construction jobs. But aren't most construction jobs (except Kemper CCS) temporary?

Five states where taxes are going up in 2017. Can you name at least one of the five? If you did not name California, you are not paying attention. These are the five states listed by Kiplinger:
Maine, California, New Jersey, Pennsylvania, and, Louisiana.
This was mostly click bait: either previously announced and well-known (higher gasoline tax in NJ) or inconsequential to most of us (higher cigarette taxes)


The five refineries in the U.S. Pacific Northwest (PNW) performed better in 2016 than rivals on the East Coast for two main reasons. First, the changing pattern of North American crude supply has worked to their advantage. Faced with the threat of dwindling mainstay crude supplies from Alaska, refiners in Washington State replaced 22% of their slate with North Dakota Bakken crude moved in by rail. They have also enjoyed advantaged access to discounted crude supplies from Western Canada. Second, PNW refiners face less competition for refined product customers than rivals on the East and Gulf coasts, meaning they have a captive market that often translates to higher margins. Today we review performance and prospects for PNW refineries.

#17 in the 20-song countdown. Finding another crying time song? Awesome. Finding one with Barbra Streisand? Priceless:

At the end of the day, the 2017 presidential election was all about NYC, the Trumpers vs the Never-Trumpers.

At least that's how New Yorkers see it, based on coverage in The New Yorker.
Posted by Bruce Oksol at 8:34 AM