In Addition To Gasoline Demand, It Appears Demand For Heating Oil Has Fallen Significantly, Also -- Noted By A Reader -- January, 19, 2017

Earlier today I posted this note:


With more folks returning to work, or at least not being laid off, one would have thought gasoline demand would have increased. Gasoline demand is now lower than it was a year ago. The price of gasoline has increased about 6 cents/gallon over the past week or so, but that certainly is not enough to explain the significant decline in gasoline demand. 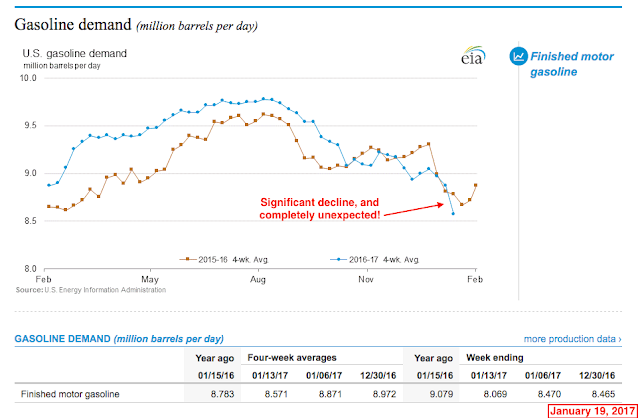 After the note above regarding gasoline demand was posted a reader noted something else (see first comment at this post). Look at the graph below, weekly US distillate fuel oil supplied: 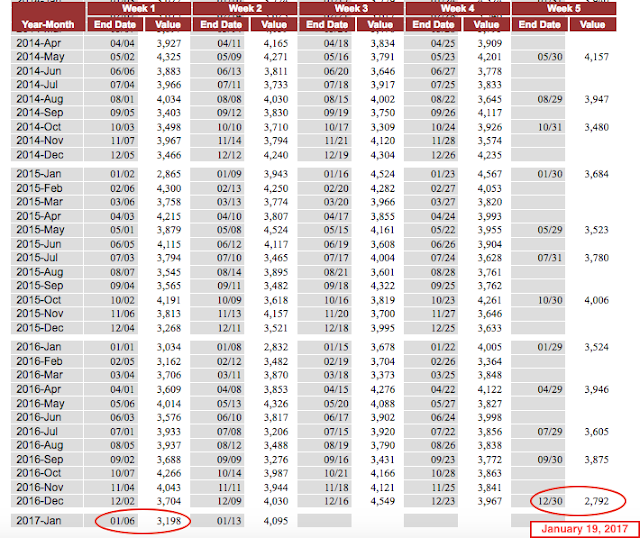 Pay attention to the weeks highlighted with the ovals. The last week in December was incredibly low, and the first week in January was, at best, mediocre compared to previous comparable weeks.

It's possible the distillate fuel oil is simply "one of those things" (a snapshot in time) and perhaps reflecting really warm weather that last week in December (I don't know; one would have to check), but when you look at the gasoline demand plunging over the past few weeks and now the fall in heating fuel oil, one begins to wonder what might be going on.
Posted by Bruce Oksol at 7:11 PM