Later, 6:58 p.m. Central Time: in the original post below I mention the four factors that suggest "contango" may be the new normal:
Shortly after posting, a reader sent two additional links that continue the theme.

With regard to China, Reuters is reporting that China's Saudi crude oil imports in February hit record high.

China's total oil imports rose about 20 percent on year to the highest ever on a daily basis in February, when near 10-year low global oil prices drove buying from a group of new importers and for state and commercial stockpiling.

I now see this was posted earlier on the blog, but never hurts to post again. Smile.

With regard to reserves, BloombergBusiness is reporting that Shell posts worst performance on oil reserves since the 2004 scandal:


Royal Dutch Shell Plc said it depleted its oil and gas reserves much faster than it replenished them with new resources in 2015, its worst performance since an accounting scandal that engulfed the company 12 years ago.

Shell said its reserves replacement ratio -- the proportion of oil and gas production during the year that was offset by the addition of new resources -- was minus 20 percent. The company not only failed to replace any of the 1.1 billion barrels equivalent it pumped in 2015, but also wrote off another 200 million barrels to account for the plunge in oil prices.

Back on February 21, 2016, it was also reported that XOM failed to replenish its reserves (in 2015) for the first time in 22 years. Exxon Mobil’s so-called reserve-replacement ratio fell to 67 percent in 2015, much, much worse than Shell, if I read the numbers correctly.

Disclaimer: this is not an investment site. Do not make any investment, financial, travel or relationship decisions based on what you read here or think you may have read here. There will be a link to a site (or sites) in this post: I have no relationship with any of these links. I post this stuff only to help me understand the Bakken better, and one of the ways to follow the Bakken is to follow the money.

Contango? I've alluded twice in the last few days that I was going to comment on contango. The tea leaves suggest "contango" is the new normal.

I know next to nothing about backwardation and contango, so a quick google search helped a bit.

First, it appears to be relatively difficult to find good historical contango/backwardation charts (probably because no one cares): 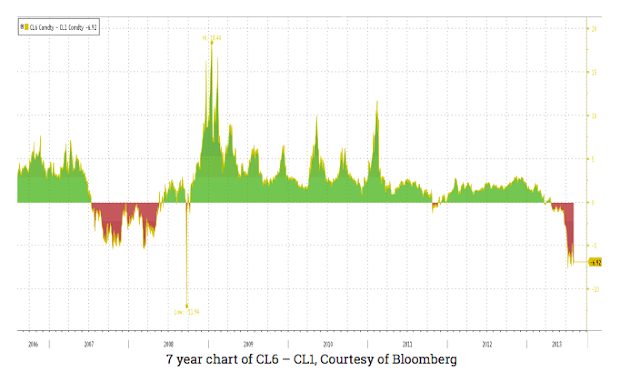 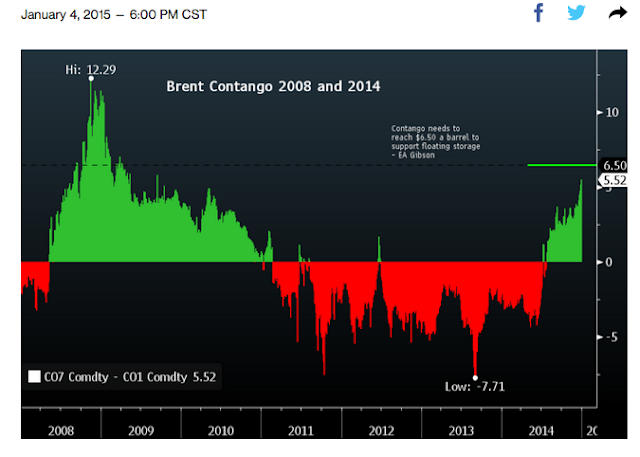 Second, this article, asking the same question I had raised: is contango the new normal? Be forewarned, this last link is a sales pitch of sorts, but that doesn't mean it doesn't have useful information. This is his summary and beginning of his sales pitch:

If you talk to resource industry titans—the ones who’ve made hundreds of millions of dollars and been in the sector for 40 years—they’re now saying that they’ve never seen the resource share prices this bad.

Brokerage firms focused on the resource sector have not just laid off most of their staffs, but many have shut their doors.

The young talent is the first group to be laid off, and there’s a serious crisis developing in the sector, as many of the smart young guns have left the sector to claim their fortunes in other sectors.

There’s blood in the streets in the resource sector.

Now if you believe that, as I do, to be successful in the resource sector one must be a contrarian to be rich, now is the time to act.

I have invested more money in the junior resource sector in the last six months than I have in the last five years. I believe we’re in contango for resource stocks, meaning that the future price of the best juniors will be worth much more than they are currently.

The writer has a lot of data to support his case. I think he made it much more difficult than it needs to be. I think this would have been much simpler:
It's hard for me to believe that we won't remain in contango at least until 2025. There may be some dips, and there may be some dips into backwardation but if they occur, they will be shallow and short-lived.
Posted by Bruce Oksol at 10:24 AM