John Kemp Looking For US Gasoline Demand Record To Be Broken; EIA Not Quite Ready To Go There -- Yet -- March 21, 2016

Regular readers know my thoughts on record US gasoline demand this summer -- the magic number is 10 million bbls on at least one day. The US has never had a 10-million-bbl demand for gasoline, though it has come close.


The United States will probably consume a record amount of gasoline in 2016, passing the previous peak set in 2007, and the prospect is helping lift crude oil prices.

Recent data indicates the country is on track for its biggest-ever driving season this summer, which will keep refineries running flat-out turning crude into the motor fuel.

A rapid expansion in U.S. gasoline consumption has coupled with strong demand growth in India and China, falling crude output in the United States, and hedge funds turning bullish, to send crude and fuel prices surging.

This is so incredibly interesting. I wrote the contango article about an hour ago; now this story. LOL.

The U.S. Energy Information Administration (EIA) is still forecasting consumption in 2016 will remain slightly below the 2007 peak.

On Feb. 23, the EIA published a commentary titled “Motor gasoline expected to remain below 2007 peak despite increase in travel”.

But the agency has been revising its estimates higher in response to the extraordinary strength in demand exhibited in recent high-frequency data. 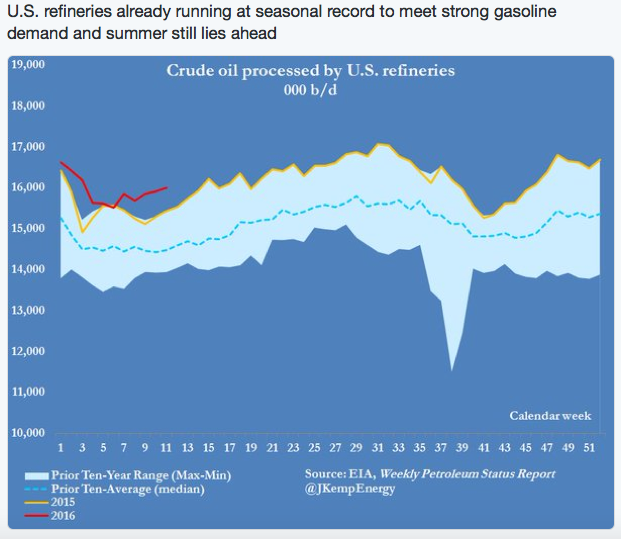 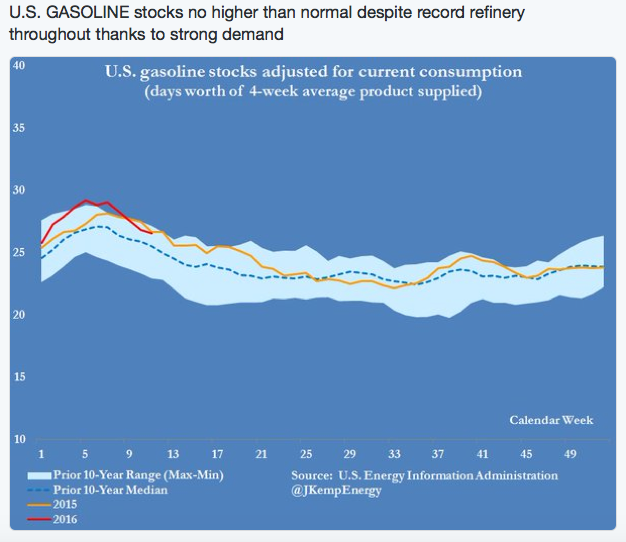 If we hit a record, the price of oil will rise 5% on that news, all things being equal (the price difference in the interval between 30 days before and 30 days after the 10-million-bbl day).
Posted by Bruce Oksol at 11:25 AM