February 17, 2019, T+46: worse start for any Black History Month I can recall -- starting with blackface racism by governor, attorney general in Virginia; and Virginia's African-American lieutenant governor named in sexual assault. Now we have African-American actor Smollett fabricating story of being beaten by MAGA, white supremacists; every media outlet and Democratic political leaders at the national level joining in the chorus to blame MAGA, white supremacists, only to find out that Smollett was lying; hired two "Nigerian brothers" to beat him up; then filed a false police report. Headline: grand jury? Could face three years in prison. My hunch: the case is dropped, and Smollett shows up on Oprah Winfrey to begin his rehabilitation. A year from now the case will be forgotten and Trump will still be "the story."

February 14, 2019, T+43: day 20 of open border negotiations and amnesty. Looks like Schelosi will send President Trump a valentine care with $1.5 billion to continue building the wall.

February 12, 2019, T+41: day 18 of open border negotiations and amnesty. My hunch is that no one will stand in line to vote for Joe Biden. Turnout for Joe Biden will be a record low. Turnout for Trump will be high, maybe not as high as the number who voted for Trump when he ran against Hillary, but the lower turnout will be Biden's problem, not Trump's. Link here. This is why some folks want "virtual voting" -- vote on apps, vote by phone. Those who don't want to stand in line can simply phone it in. 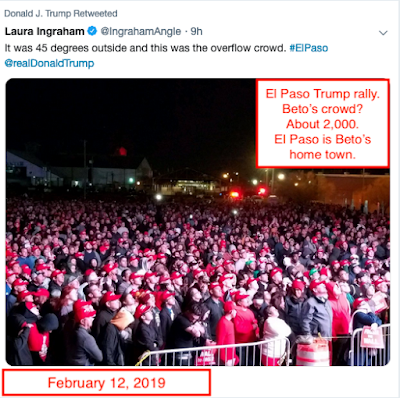 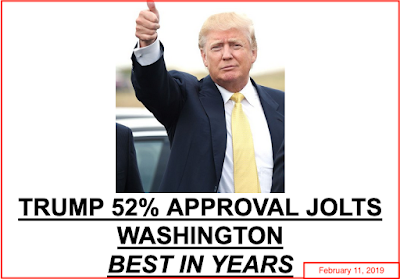 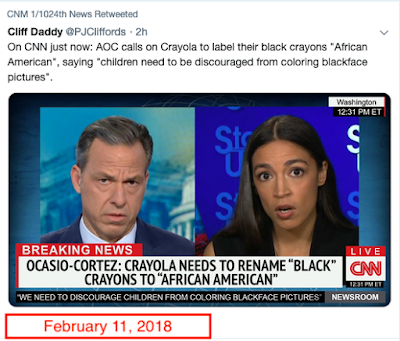 February 10, 2019, T+39, day 16 of open border negotiations and amnesty. Pocahontas officially enters the race; wants to be commander in chief; is first Native American to run for president of the United States (need to fact check). It is important to archive Occasional-Cortex' socialist program. It will gradually fade away and I don't want our granddaughters to miss this:

It will be interesting to see how long NPR leaves AOC/GND FAQs on-line. As of 10:37 a.m. Central Time, February 10, 2019, the link is still working. Multiple sites, including this one, have noted that AOC has removed the FAQs from our website and is now disavowing it as "her" document, suggesting that it was a GOP "dirty trick." How ridiculous has the media become? The Drudge Report banner today: more of President Trump's schedules have been released, and they are not even the fully detailed schedules given out to only a few folks.

After The Midterms (partial govt shutdown)
Day 1 -- 57: from the election to the new Congress