September 7, 2017, T+230: RINOs saying they are upset with President Trump cutting deals with the Dems is laughable. To the best of my knowledge, Congress (in the hands of the GOP) has done little to move Trump's agenda; they are still way behind in confirming nominations. I have no idea what GOP will campaign on in 2018.

September 5, 2017, T+228: Thomas Friedman on CNBC this morning highly supportive of Trump's policy on North Korea and highly supportive of Trump's "wall." Iraq is a completely different country: US and Iraq on the same page; huge success. On Afghanistan, he was very clear: the US can lose late, lose early; lose big, lose small. Five-thousand more troops won't make any difference. 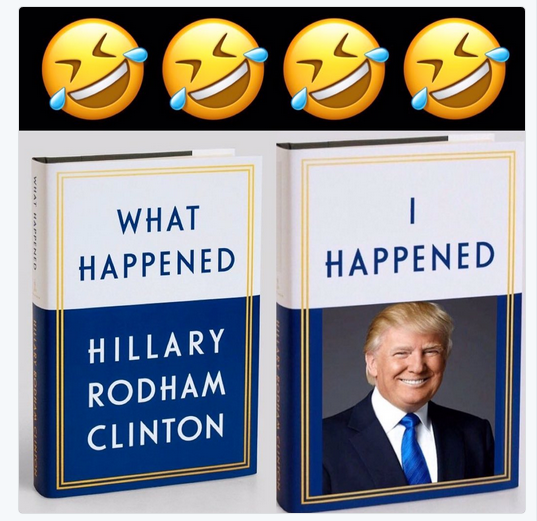 September 3, 2017, T+226: what a bunch of hypocrites. Dems and RINOs criticize Trump for ending DACA (the "Dreamers' Act"). In fact, he is postponing his executive order for 6 months which will give Congress more than enough time to pass a law to put DACA into effect. Congress simply has to pass a veto-proof law protecting "Dreamers." This is not rocket science. But Rachel Maddow will have trouble understanding the nuances of Trump's thinking. 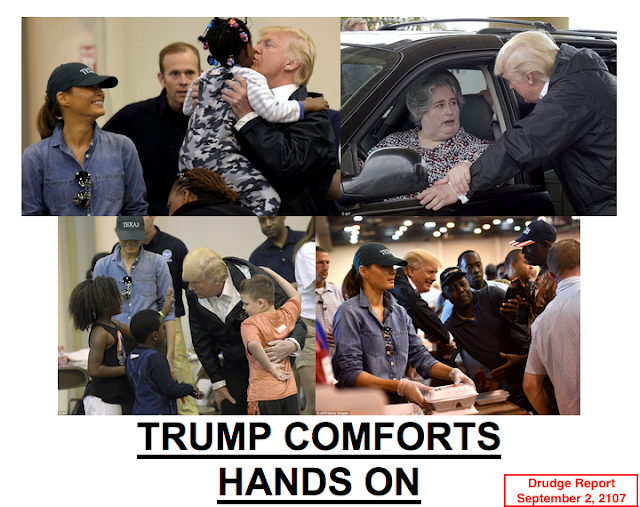 September 1, 2017, T+224: Trump is simply awesome. Compare Katrina, Sandy, Harvey. Bush did a flyover; Obama made a speech then back to campaigning. Trump: two visits in three days.

August 30, 2017, T+222: Holy cow! Making American great. Jobs report today. ADP employment report to be reported later. Forecast: US added 185,000 jobs in August. Actual: holy cow! 237,000 jobs added in August. Steve Liesman, CNBC seems awestruck, blown away. Doesn't understand where jobs are coming from. Talking head: "can't last forever." In addition, the July number was revised higher, up 23,000 to 201,000. And now they are saying the initial August figures tend to be on the light side and are generally revised upward. Wow. And in a very long CNBC segment, Trump administration not mentioned. In fact, Steve Liesman specifically said he did not want to talk politics.

August 29, 2017, T+221: raising the debt limit just got easier. On another note, it looks like Denmark is giving up on the Paris (Climate) Accord also; will scrap the 200% tax on automobiles for something more reasonable, like 100%. LOL.

August 27, 2017, T+219: so, how will this play out in 2020 when Trump's "Hillary" opponent campaigns on need to take down statues and memorials of George Washington, Thomas Jefferson, and, Christopher Columbus?

August 23, 2017, T+215: Gary Cohn has "balanced" interview with Financial Times; mainstream press blows it out of proportion (as usual); sounds like he wants to be Fed Reserve chairperson.

August 20, 2017, T+212: Trump and family doing the right thing. Skipping the tuxedo-fat cats ball honoring the Hollywood elite (Kennedy Center Honors). The Trumps will not attend this year's Kennedy Center honors. It will be interesting to see how many women show up in high heels; Melania will be home in comfortable shoes.

August 19, 2017, T+211: With Steve Bannon out of the White House, it is likely Gary Cohn will stick with Trump. If Cohn does not leave the White House, he will be appointed Fed Chairman. The big question: will the Senate confirm Cohn? This is not a slam dunk.

August 18, 2017, T+210: someone suggested that with all the leaks in Washington, and the fact that this has gone on for months without a leak suggesting anything has been found, the likelihood that Robert Mueller has found a/the smoking gun is zilch. Nada. Nil.

August 17, 2017, T+209: political fallout of disbanding the "economic" and "strategy" councils by Trump: zilch. Nada. Nil. Now CNBC suggesting that disbanding these councils was the right thing to do. LOL

August 16, 2017, T+208: Trump follows Obama's example of moral equivalence -- WSJ. Link here. Time to rename the Jefferson Memorial and the Washington Monument, "Monument #1" and "Monument #2" immediately, while putting together plans to tear them down. Meanwhile, Mount Rushmore National Park needs to be closed immediately. Cities and states with names like Washington, DC. and Jefferson City, MO; and Washington state need to change their names. Perhaps "City #1" and "City #2" until city leaders can come up with acceptable names. Washington State, of course, would become "State #42." When I look at Trump's (former) manufacturing council, it was composed of all white males, generally in their 50s and early 60s; one woman. No African-American? The strategy forum might have had two African-American CEOs. How can this be in this day and age? All white males heading American corporations. It's also noteworthy that 90% of anchors on CNBC are white males. The only non-white males are "info-babes" as one known radio personality calls them.

August 14, 2017, T+206: I would take the criticism of Trump regarding his response to weekend violence in North Carolina a bit more seriously if that same level of criticism had been voiced following the dozens of police killed directly related to Black Lives Matter. Maybe.

August 11, 2017, T+203: North Korea says it will launch four ICBMs to land 30 miles off-shore America's largest military base in Asia, on Guam. Russia tells the US to chill. Russia goes "ballistic" when US simply announces talks with Russia's neighbors regarding missile defense. Whatever.

August 10, 2017, T+202: VP Pence's "real" power move -- replacing his own chief of staff with talented political operative, Nick Ayers. Pence could not do that until Reince Priebus was out of the White House. Priebus would not allow Ayers to assume a White House staff job -- because, although they were "friends," Ayers was not a member of the RNC. Wow, sounds like the old Soviet Union politburo.

August 9, 2017, T+201: see first comment -- in the key 2018 battlegrounds, Trump's support is as high as ever. Americans opt out of ObamaCare: 6.5 million Americans pay "fine" rather than sign up for ObamaCare. I think it can be safely said that the worst tax plan ever foisted on the American public was ObamaCare, bar none.
Posted by Bruce Oksol at 12:01 AM