This Tells Me All One Needs To Know About Analysts' Understanding Of Human Behavior -- March 26, 2020

Breaking news: my daughter in on the freeway on way to work -- she texts me -- most seen trucks: Tom Thumb (major grocer in Texas), Kroger (grocer), and Amazon Prime (everyone knows).

We are going to see a retail push/surge like we've never seen before.
US weekly jobs report (first time unemployment claims), link here:

This number is staggering. I'm not watching the television at all (except TCM) so I have no idea how talking heads are taking this. I would think the market would plummet on this news. 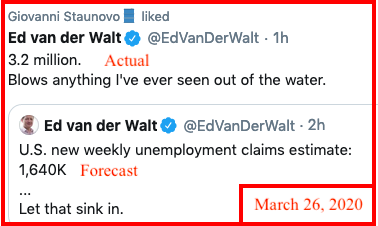 So, what does this mean? Some ideas to throw out, explore, story lines::
On-line economy: this is really, really not well understood. No one was prepared for this. Example: my daughter in health profession; psychiatric nurse practitioner; directed to do "tele-health" whenever possible -- turns out the "company" did not have video capability; audio capability (speakers); up-to-date computers; overnight they got some of this stuff but not well planned out. There will be a second wave of buying "tele-work equipment" across the country as more and more go to on-line retail.

Tethered vehicles: will Americans be in the mood to buy tethered vehicles in 2020? Automobile manufacturers put a lot of CAPEX into EVs this year. In hindsight, will be seen as huge, huge mistake. Some of it was not predictable (coronavirus) but anyone following oil production knew that there was a good chance that oil prices would be "depressed" for a long time. 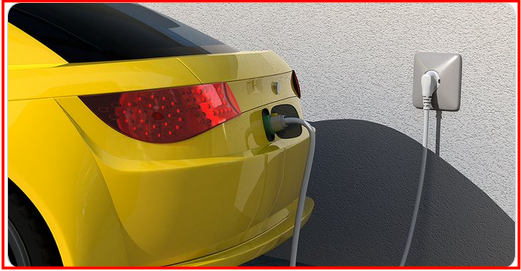 My hunch: we're going to be in this lockdown a lot longer than folks realize now that the CDC is control, along with the media, and the public health tail is wagging the economy dog.

But other than the investor class, and 75% of Americans barely making ends meet month-to-month who's really hurting? I bet a lot of seniors are doing just fine. Their lifestyle probably hasn't changed a whole lot.

I'm hoping once we get the testing and quarantining down to a routine, states like North Dakota, South Dakota, Montana, and Wyoming can go back to normal, to the extent that local citizens want to go back to normal. There will always be risk involved.

Public health departments should be ramping up staff to do testing, monitoring targeting quarantining.