The video may not do justice to the incredible autumn colors of North Dakota, but it will have to do. The video was take about two weeks ago when I was driving north to the Bakken, I was almost "blown away" by the bright yellow as I drew closer to the north unit of the Teddy Roosevelt National Park just south of Watford City. It was incredible. I never understood artists talking about "fire" leaping out at them when painting some landscapes, but now I understood. This was truly incredible.

I don't think I am exaggerating when I say this is even better than what I remember seeing in New England.

In New England, at least for me, all the foliage and all the forests, is claustrophobic. And, too much. It's almost as if the painter should have quite earlier, but for some reason kept painting more trees, and more red, and more yellow, so it became kitschy and overwhelming.

But not in North Dakota. Not overdone at all. The painter knew exactly when to quit. And to make those bright yellows leap out at you and surprise you, he/she surrounded the yellow blaze with drab (in a positive way) brown geologic formations offset with evergreens.

The video cannot possibly show you how incredible the scenery was, but it will give you an idea. This is on US Highway 85, going north, just south of the Long X bridge, just before one enters the long descent into the valley carved out by the Little Missouri River.

Interestingly enough, the formations and the scenery outside the park to the south and to the west seem even better than what one sees inside the park, and my hunch is the ranchers will keep it that way.

Going south, I happened to catch a semi carrying part of a wind tower to be raised at the wind farm near Hebron, North Dakota. The components for that wind farm, and I hazard to bet, the components for all wind farms in western North Dakota, including the one four miles north of Tioga, are staged and will be staged out of Red River Oilfield Services east of Williston. 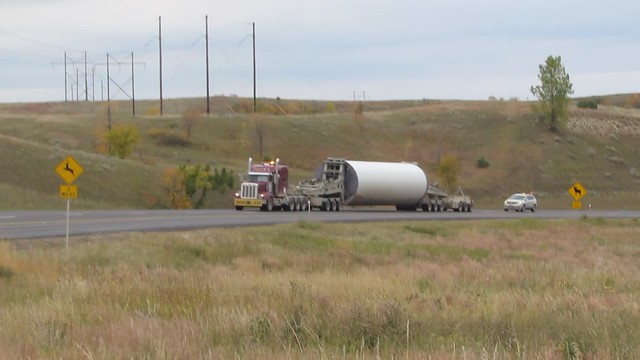 Email ThisBlogThis!Share to TwitterShare to FacebookShare to Pinterest
Labels: Video