Later, 1:32 p.m. Central Time: wow, it never quits. I mentioned below that the Exxon investor day presentation has produced any number of articles. Now another one, this time by Bloomberg re-published in The Washington Post, an op-ed: Exxon's billions could spawn a Permian monster, but the writer of the op-ed questions whether Exxon can actually deliver. The same folks questioned whether the Bakken could ever deliver.


Exxon Mobil Corp. took four hours on Wednesday morning to tell investors: “Hold on a bit, we got this.”

But investors aren’t in a patient mood with high-spending oil and gas companies, and Exxon’s capital-expenditure budget — summary: not much change from $35 billion a year — drew the unsurprising response. Yet, looking beyond the next couple of years, Exxon provided a lot for everyone, investors and competitors, to chew on.

Exxon is doing nothing less than an overhaul of the portfolio, as might be expected after a few years of setbacks. When you’re this big — the size of an OPEC producer — that costs money. Exxon projects it will generate $190 billion of free cash flow through 2025, equivalent to almost 60 percent of its current market cap and implying $90 billion after dividends potentially available for buybacks. However, eyeballing the fuzzy bars on Exxon’s deck, that capacity doesn’t start coming through in earnest until 2021.

The fact that Chevron Corp., which held its own analyst day on Tuesday, is already buying back stock and yielding more on near-term payouts is where much of the interest in Exxon ends in the current environment. But there are implications from Exxon’s numbers that shouldn’t be ignored.

Exxon’s guidance implies cash from operations almost doubling by 2025 to $60 billion. Coincidental or not, that would match the peak reached in 2008. Production is projected to be higher; the fuzzy bars suggest annual increases of 3 to 4 percent through 2025. Even so, that level of cash flow would be astounding at a $60 oil-price assumption compared with the $100-a-barrel that prevailed in 2008 (don’t forget U.S. natural gas averaged almost $9 per million BTU that year, too).

Investors need to watch for these tectonic shifts. Some come but once in a lifetime.

For energy investors, one tectonic shift to watch -- IMO 2020.

The ExxonMobil investor day presentation continues to generate more news stories. I've posted several links in the past couple of days. Now, another one, from the Financial Times:


The big oil companies turned up late to the Permian party, but they are making up for lost time. ExxonMobil and Chevron, the two largest US oil groups, this week announced plans for spectacular production growth in the Permian Basin, the heartland of the US shale boom that stretches from west Texas into east New Mexico.

The Permian’s oil output has already shown prodigious growth in recent years: it has doubled since the summer of 2016, to 4m barrels a day, or roughly a third of total US daily production. The announcements from Exxon and Chevron were a signal that the boom would continue.

“It is quite a stunning development, in terms of the scale and the scope for acceleration,” said Lysle Brinker, an equity analyst at IHS Markit. “This Permian opportunity is something that these companies haven’t had for a very long time.”

From 2017 to 2019 -- look at the proved reserve growth. For XOM and CVX, almost doubling. This is not trivial, and the companies consider these "short-cycle, high-return" opportunities: 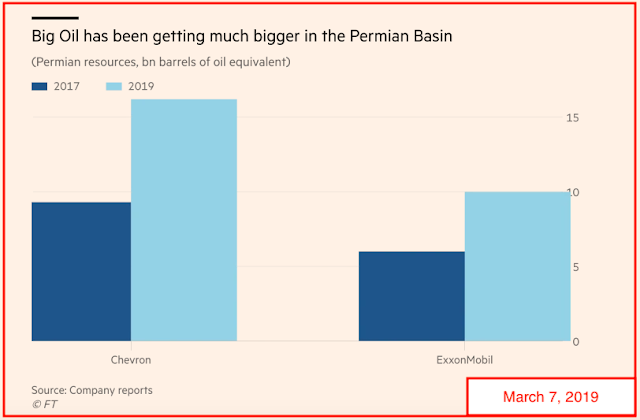 
Oil and gas production costs on the Norwegian Continental Shelf (NCS) rose by 7 percent in 2018 compared to 2017, ending a streak of several years of continuous cost reductions, Norway’s state-owned oil and gas firm Petoro said in its annual report on Thursday.

Petoro, which manages the Norwegian government’s stakes in Norway’s oil and gas fields and is a partner in many licenses on the shelf, delivered a total of US$13.8 billion (120 billion Norwegian crowns) to the state in 2018, up by US$3.8 billion (33 billion crowns) compared to 2017, in one of the best years ever in Petoro’s history, the company said.

However, Petoro noted that the effect of the drastic cost cuts has started to level off.

“We are not seeing the results of further efficiency gains on our bottom line for 2018,” Petoro said.

The 7-percent rise in costs is worrying, the company noted, adding that “We are dependent on the efforts made in recent years having a lasting effect, so that we can reduce costs further through continued improvement in all parts of the value chain.”


This Magic Moment, Jay and The Americans
Posted by Bruce Oksol at 10:14 AM