America’s largest oil refinery, located in Port Arthur, Texas, is owned by Saudi Arabia’s state-run oil company, Aramco, and since it first bought a stake in 1988, the Motiva refinery guaranteed the kingdom a strategic foothold in the world’s largest energy market.

The tankers carrying millions of barrels a month of Arab Light crude from Saudi export terminals to Port Arthur were testament to the strength of the energy and political ties binding Riyadh and Washington.

All of a sudden, there are very few Saudi ships arriving in Texas. Since July, Aramco has constricted supply, attempting to drain the crude storage tanks at Motiva -- and many others across America -- part of a plan to lift oil prices, even at the cost of sacrificing its once prized U.S. market.

While Motiva is most affected, the rest of the U.S. oil refining system, from El Segundo in California to Lake Lake Charles in Louisiana, has also taken a hit.

"The drop is huge," said Amrita Sen, chief oil analyst at consultant Energy Aspects Ltd. in London. "It’s not just that Saudi exports are low, but they have been low for several months. 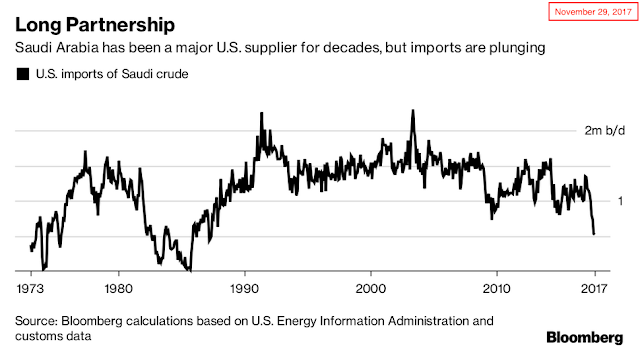 Had I "sped-read" a passage in the the biography of Siegfried Sassoon I would have missed this passage describing Sassoon's enlistment with the cavalry unit, the 1st/1st Sussex Yeomanry:


Sassoon, who brought his precious hunter Cockbird with him, in their desperation to keep the few horses they had managed to requisition , are reputed to have hidden them in cellars.

In context, one can quickly figure out what a "hunter" is. But I did not know more than that.

For those interested in "hunters" vs "jumpers," see this link.
Posted by Bruce Oksol at 10:41 AM