If one does a "word/phrase" search on the blog for "closed for business," this is the first hit --


KMI, Suggesting Canada Is Closed For Business, To Sell All Canadian Assets -- September 17, 2018.

It appears ExxonMobil has also figured that out -- that Canada is closed for business. This is absolutely incredible.

Don sent me the link. Thank you.

LNG demand is growing but environmental groups say exports will boost carbon emissions in Canada, both through gas extraction and the liquefaction process.

Let's see, simple arithmetic suggests that as of February, 2019, the Canada's Stop-All-Development Agency, will have held up this project for four years.

But unlike TransCanada, it appears that Exxon has learned to cut its losses.

Exxon is taking advantage of projects where they might actually be built. From the article:


Exxon’s decision signaled it is concentrating on LNG projects with Qatar Petroleum and a proposed expansion of its chilled-gas operation in Papua New Guinea.

As a side note: Qatar again shows up in the news.

Meanwhile, look at what is happening in the US: 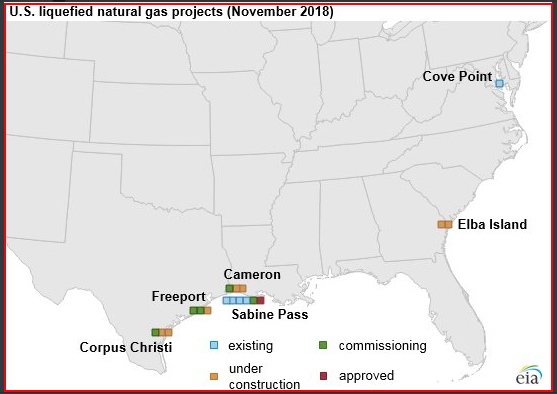 One can assume that these projects would have never gotten this far along by now (or would have been killed outright altogether) had Hillary been elected president.

I count eighteen LNG projects in the graphic above.
Posted by Bruce Oksol at 11:59 AM