August 2, 2020: something is still screwy in Fargo and no one is talking about it, but everybody knows. 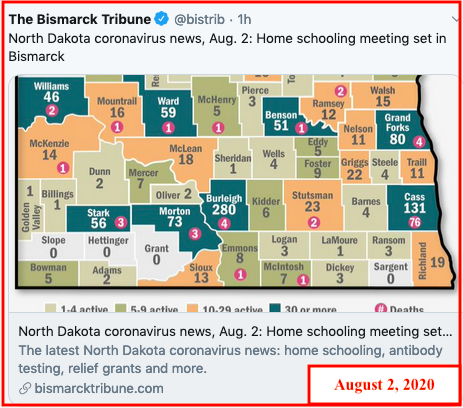 Washington, DC, has just put North Dakota on its list of high-risk states.

Look at the map below.

Something strange is going on in Fargo (Cass County). It has a huge population and yet it has ONLY 136 active cases, not all that many more than Williston. And yet it has 75 deaths. Even in Grand Forks, only four deaths. Minot, one death. Bismarck has way more cases than Fargo (261cases) and only three deaths.

The confounding factor is the fact that these are active cases. Maybe Fargo has a huge number of cases overall but they are coming down quickly and there are only 136 now. But that still wouldn't explain the double-digit number of deaths in Fargo (almost triple-digit) compared to low single digits everywhere else. In fact, not one other city in North Dakota, not even Bismarck, has recorded more than three deaths due to the virus, except for Grand Forks with four.

One cannot argue that outlying cities are sending their sickest to Fargo for medical care, because that would also be true of Minot, Grand Forks, and Bismarck where each have huge referral centers for their regions. 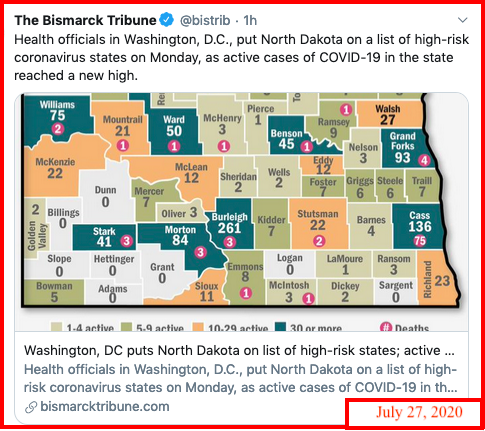 Does it mean anything to anybody that the heart of the Bakken, McKenzie County, where exists the highest concentration of oil workers (with associated challenge of social distancing) there have been zero, repeat zero, deaths to date due to coronavirus, compared to 75 in Fargo? What does McKenzie County not have much of: ICUs, and nursing homes.
Posted by Bruce Oksol at 3:31 PM