At this post, earlier this week, it was noted that Saudi Arabia's foreign reserves account had unexpectedly increased.

At the post was a link to a Reuters article with more information, and one of the few sources so far to report on this unexpected development.


The bank’s net foreign assets rose by $8.3 billion from September to $485.9 billion last month; they shrank by 9.3 percent from a year ago. The reserves peaked at $737 billion in August 2014 before starting to drop as oil prices plunged.

The government has been liquidating the reserves to cover a big budget deficit caused by low oil export receipts, and to build up its top sovereign wealth fund, the Public Investment Fund, which is becoming a key force in developing the economy.

So, if I understand this correctly, Saudi Arabia is taking cash (liquidating) from its reserves to fund two items:
So, if the kingdom is taking money out of reserves to pay for its budget (which I assume does not change much month-over-month regardless of how much they have cut the budget for the year) and to fund another slush fund (the Public Investment Fund), how did the foreign reserves account, not only reverse direction, but grow significantly in one month?

Reuters' explanation: the price of oil has gone up. LOL. 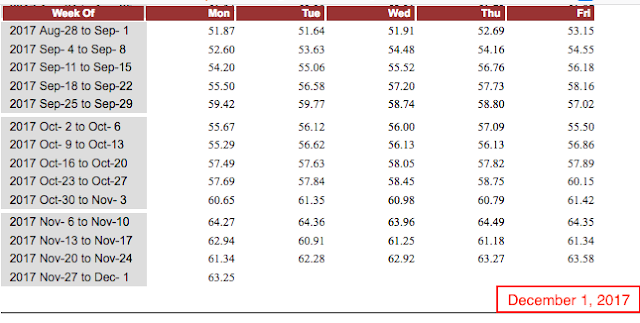 The spot price has increased significantly, but it's my understanding that sellers/buyers of oil work off six-month contracts. Of course, they can be rolling contracts, new ones signed each month, so one probably needs to go back a few more months than that posted above. But one assumes that when oil was $40 / bbl some months ago, buyers would set a ceiling not a whole lot higher than that ... one can argue this all day long, but without the figures we will never know. The bottom line for me is that contracts are set for weeks and months in advance and using the spot price to explain Saudi Arabia's good fortunes in October, 2017, sounds a big disingenuous.

At the same time, Saudi Arabia is supposedly exporting less oil over time to stay within the agreed quotas.

[Saudi consumes a lot of its own oil for air conditioning needs in the summer, and by October that is over. Saudi can now produce the same amount of crude oil but sell more overseas, but this is a "red herring" [unless Saudi is cheating]: it does not matter how much Saudi is producing; it matters how much they are exporting.

We won't know for the next few months whether the increase in foreign exchange reserves was a one-time event (an anomaly as NASA would call it) or if it truly was due to rising price of Brent, and status quo on exports.

A reader suggests that it might have been related to the purge. That makes a lot of sense -- except the purge seems to have taken place on/about November 4, 2017. It could have been going on for some weeks earlier, and it was only being reported by November. That's a tough one. But it's very possible, the prince was using a silk glove in September and October to get wealthy princes and even-wealthier tycoons to pour cash into the foreign reserves account, and then used an iron fist in November for those who were not paying their fair share.

How much money do these wealthy tycoons have?


Alwaleed is the richest Saudi, with a $28 billion fortune that dwarfs King Salman's net worth of $17 billion. Kamel and Ibrahim are also billionaires. Since the arrest, there have been news reports of frozen bank accounts. But the crown prince may be eyeing more than these notables' money.

Wiki has a list but appears to be somewhat out of date, based on Alwaleed's wealth as reported by The Washing Post (the link above).

Back to the data points at the very beginning of this long note: the foreign reserves account rose by $8.3 billion. It should have decreased by about $3 billion. That's a spread of $11 billion, easily covered by Prince Alwaleed, with or without his consent. LOL. And that's just one of several wealthy tycoons and wealthy princes.

I'll leave it there. If Saudi's foreign reserves continues to grow (or at least not continue to hemorrhage) then perhaps there is a secular (long term change) that explains the October surprise. I'm kind of hoping it's an anomaly -- makes for good speculation. LOL.
Posted by Bruce Oksol at 4:27 PM