Music: it looks like the new Roy Orbison "Mystery Girl Deluxe (CD/DVD) is available, having been released May 19, 2014. Initial Amazon customer reviews suggest it should be a good album.


I posted the narrative yesterday and my thoughts regarding this week's gasoline demand report from the Obama administration, but I forgot to include the graphic. The graphic at EIA is worth a thousand words. When you get to the site, scroll to the very bottom and look at the surge in gasoline demand. Then scroll up and look at the supporting data and graphs. It is really quite remarkable. I assume the data does not include Memorial Day Weekend which should show up in next week's report. 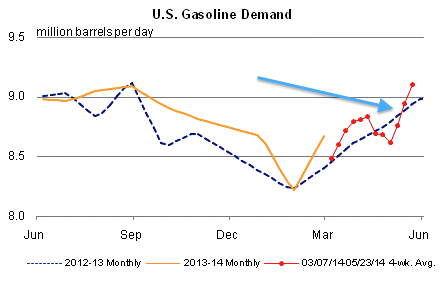 I put in the "blue arrow" just because it's fun to do. It's hard to miss the red line.

Extreme weather. The Washington Post reports that it's been more than 3,000 days since the last major hurricane.


Such a streak, or “drought”, is unprecendented going back to 1900.  As of the start of this hurricane season, the span will be 3,142 days since the last U.S. major hurricane landfall.

The previous longest span is about 2½ years shorter!  While this is a relief for coastal residents and businesses, it inevitably increases complacency.  The longer you go between events, the less likely you are to fully respect the next one and heed warnings.

The president's war on coal must have worked.


The market: I see the Dow squeaked/eked out a gain at the very last hour. Quite a week.