Saudi Arabia: again, I am spending a lot of time on Saudi in this post, for several reasons. Over time, the reasons why I spend so much time on Saudi Arabia have changed. These are the three reasons that currently make this a compelling story:

US economy: optimism about the economy at a 13-year high.

Crude oil exports: there's a story out there, yesterday or today -- that US crude oil exports for most recent reporting period -- September, 2017 -- was way more than forecast; caught analysts by surprise.

Saudi king visits Russia. Astounding. Tectonic shifts in the Mideast. Even the king doesn't need his reading glasses to see this chart: 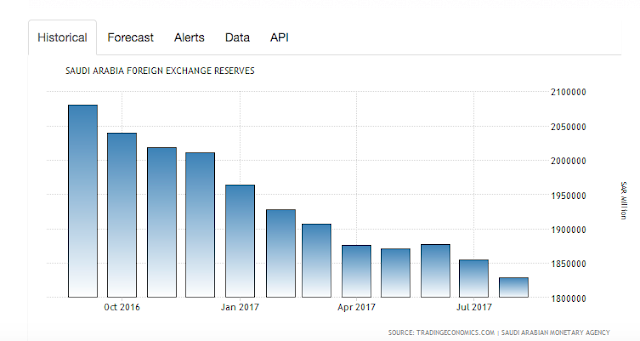 Market: looks like new records, again, today. I'm sure CNBC is still trying to figure this one out. Suggestion: listen to Warren Buffett's recent interview on your show. Already in early morning trading, 194 new highs on the NYSE, including BRK-B; GM; D. R. Horton; Lennar; Oasis Midstream Partners; Valero;
Investing: wow, I would love to talk about individual companies with regard to investing, but this is not an investment site, so I won't do that. Of the companies noted above, I only own shares in one of them (this does not include what I might have in IRAs, 401(k)s, etc.)

NFL-free Thursday night. Speaking of sports, last night's "win or go home" game between Colorado Rockies and the Arizona Diamondbacks was simply incredible. I'm glad I saw it. It is ironic (?) that just as my love affair for the NFL and college football is pretty much over, I'm starting to enjoy baseball. I think I will enjoy NASCAR less when "junior" retires; I care not a bit for Kyle Busch. I don't miss #24 but I'm still glad #48, Jimmie Johnson, is still racing. Danica Patrick? No longer matters one way or the other. I was thrilled when she joined NASCAR but the thrill is gone. I used to really, really dislike Keselowski, but I'm changing with regard to him, also. I look forward to the PGA, again, but not to the NBA. If we still lived in San Antonio, I would likely be a huge NBA fan. The golden years for the NBA for me? When Phil Jackson coached the Chicago Bulls.

Not to belabor the issue but look at the Saudi cash debacle. The chart above only goes back to September, 2016. What did it look like before then?

Compare these two graphs, taking particular note of the size of the bars for May, 2016, and comparing most recent data.

Now, compare to the "new" graph with updated data.

There are several things to note:
I don't know what others might say, but to me this is quite staggering.

I "predicted" there would be a month-over-month drop going into January, 2017, but I honestly never thought it would be that .... well, that graphic.

One Saudi riyal equals about a US quarter, more accurately 27 cents.

In the February note, it looked like the month-over-month decrease was in the $8 billion range and between November/December, 2016, the delta might have been significantly less, maybe $3 billion, but my calculations suggest the drop was closer to $14 billion between January, 2017, and December, 2016.