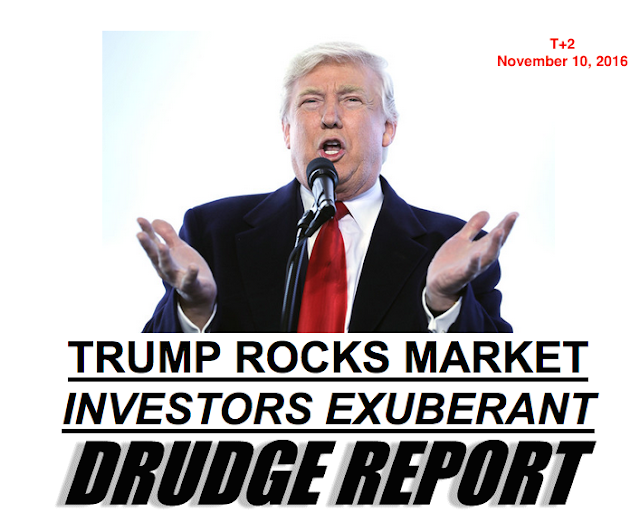 This, too, will be fleeting, but right now it feels like a light switch has been turned on, and for the first time in eight years, there is light.

Just wait until March 1, 2017, when a $1 trillion infrastructure bill is signed by President Trump. Lots of bridges, highways, airports, and harbors -- shovel-ready. Smart state governors are putting their packages together as we speak to participate in one of the biggest building booms we've seen ... perhaps since the end of WWII. The highways will include EV charging stations and additional natural gas corridors. Maybe even a "trillion-dollar tsar" to oversee all of this. Instead of vegetable gardens and White House tours, maybe that's something Melania would like to do.

The president-elect’s infrastructure plan largely boils down to a tax break in the hopes of luring capital to projects. He wants investors to put money into projects in exchange for tax credits totaling 82% of the equity amount. His plan anticipates that lost tax revenue would be recouped through new income-tax revenue from construction workers and business-tax revenue from contractors, making the proposal essentially cost-free to the government.

Mr. Trump has made a $1 trillion infrastructure investment over 10 years one of his first priorities as president, promising in his victory speech early Wednesday morning to “rebuild our highways, bridges, tunnels, airports, schools, hospitals.”

$1 trillion over ten years is the wrong way to model this. Make it $1 trillion with no "time limit." As quickly as states can put together their infrastructure plans, release the money. But hold the states accountable: the timelines have to be met; and the money has to be used for approved infrastructure. If not, the money is withheld in future outlays. Once the $1 trillion is obligated, the pot is empty. That will result competing for the money quickly, getting people back to work as quickly as possible. And include no carve-outs for special interest groups. If Trump's folks see such carve-outs, the request is denied.