Expanding on the energy story regarding India, this graph from John Kemp: 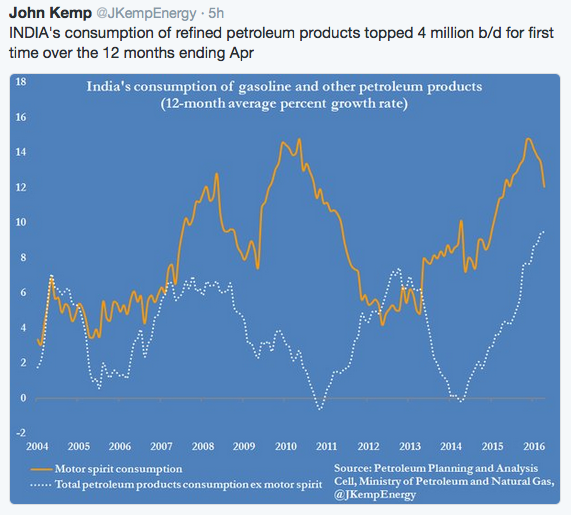 A reader sent a long e-mail regarding India after the note yesterday, which included a small snippet about Indian (sub-continent India Indians) physicians-in-training in Canada:


One of the more [insightful] students is a native of India, and he returns [to India] at least twice a year.  According to him, the growth in car traffic alone is staggering, and astonishes him anew at each visit.  Their middle class is expanding rapidly and everyone gets a car as soon as possible.  He says that any prediction he's seen about India's economic/consumer growth is a vast underestimation.

That's the feeling I'm getting, also -- a vast underestimation. I see this all the time. Bean counters fail to understand the "human psyche."

Along that same line: after the first Iraq war and all those burning oil fields, mainstream media estimated years before the fires would be put out. US-oil-well-fire-fighters had the fires out in weeks, months. Likewise, early reports were that Canadian oil producers would not get back on line for six months or more due to the current wildfire in Alberta. Now we are getting reports that some producers will be back on-line in days, many in weeks.

By the way, I reported this a long, long time ago. In the US, the #1 "ethnic" group measured by financial wealth are those categorized as Jewish. So, who is #2? Regular readers know. At least this is what I'm being told. Based on wealth, the #2 ethnic group in the US are sub-continent Indians. For those interested, they like gold.

By the way, this gives me an opportunity to clarify something that the reader above also noted. Going back to yesterday's graphic on the amount of oil consumed per capita. In general, I think most agree that oil consumption correlates with economic growth. But that doesn't mean there are not some outliers or some qualifiers. The reader pointed out that with regard to Saudi Arabia's oil consumption, they are using oil to run their air conditioners -- a most wasteful use of oil. Based on what little I know, they would do better to use natural gas from one of their neighboring countries, including Iran (like that will ever happen -- LOL).

In addition, they use a lot of oil to run their huge desalinization plants.

Saudi made a huge mistake decades ago not going to solar, and now they don't have the money to fund huge solar projects (previously blogged, for example, this post). There has been an occasional report that the legendary sandstorms wreak havoc on solar panels. If that's correct, that may explain a lot.
Posted by Bruce Oksol at 9:49 AM