Australian grid: How's that renewable energy working out? Those in Sydney, New South Wales, Australia are finding out. They will be paying upwards of $13,000 / MWh. The $13,277 / MWh starts out at 2:30 p.m. and lasts until 6:30 p.m. local time -- essentially all afternoon through the dinner hour. Link here. Coal would run about $35/MWh, I suppose. 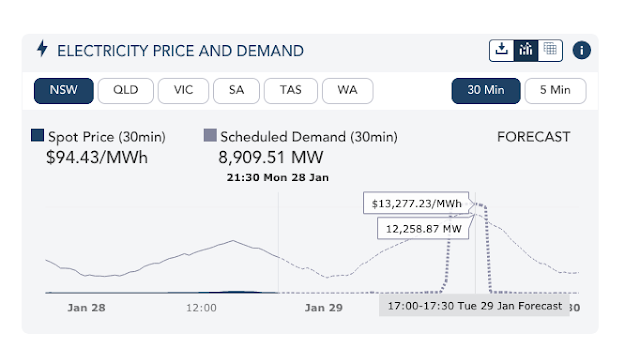 
Mexico’s energy sector has been dealing with a fair amount of uncertainty of late. Newly installed Mexican President Andrés Manuel López Obrador has promised to undo elements of the country’s historic energy reform program, limit imports of hydrocarbons, and focus on domestic production and refining. How much will all this affect the export of natural gas from the U.S. to Mexico? It’s too soon to know what the long-term impact might be, but for now, gas exports remain near record highs and the pipeline buildout within Mexico is proceeding. That’s not to say, however, that the infrastructure work has gone without its own set of challenges — many of those were apparent well before the recent political changes. Today, we begin a series examining the opportunities and potential pitfalls ahead this year for Mexico’s natural gas pipeline infrastructure additions.

Mexico’s decisions earlier in this decade to shift away from oil-fired power generation, develop a fleet of new gas-fired power plants and build a network of new, large-diameter gas pipelines to fuel them have had a profound effect on U.S. producers.

Given that Mexico’s production of natural gas has been declining for some time now — and that gas production has been rising fast in the Permian, the Eagle Ford and other shale plays on the U.S. side of the border — it seemed natural that Mexico’s power sector would turn to the U.S. for an increasing share of its gas needs.

Back in July 2018, Mexico’s imports of U.S. natural gas by pipeline topped 5 Bcf/d for the first time. (Mexico also imports LNG from its northern neighbor.)

In addition, we’ve been tracking the buildout of new gas pipelines on both sides of the border. For example, the El Encino-Topolobampo pipeline; and, the Fermaca-built pipelines. It’s clearly time for another update because 2019 has the potential to be a big year for Mexico’s gas pipelines.

We’ll begin this new blog series by focusing on the pipelines entering Mexico from far West Texas. Later in this series, we will move further into Mexico to discuss other changes under way on the gas grid. However, before we dive into the details, we do want to give a brief update on the gas pipeline buildout in Mexico.