Economic data:
To frack or re-frack? Two articles:
Friday sports:
Vermont, the "green" state? Hardly. A geeky article but worth a read. Sort of. Bottom line:


In 2016, the Vermont state Legislature was given an independent report that revealed Vermont’s electric customers actually buy zero percent of the wind energy and just 0.4 percent of photovoltaic solar energy produced in the state. Moreover, the report found, “the state’s electric sector greenhouse gas emissions had doubled over a historic 10-year period.” And they pay more for their electricity.

Texas, the "wind" state? It was my understanding based on news stories that wind energy was increasing exponentially. In fact, in the past year or so, consumption of natural gas has increased significantly, taking the place of coal, and the percentage of wind energy consumed against all types of energy has actually dropped a bit: 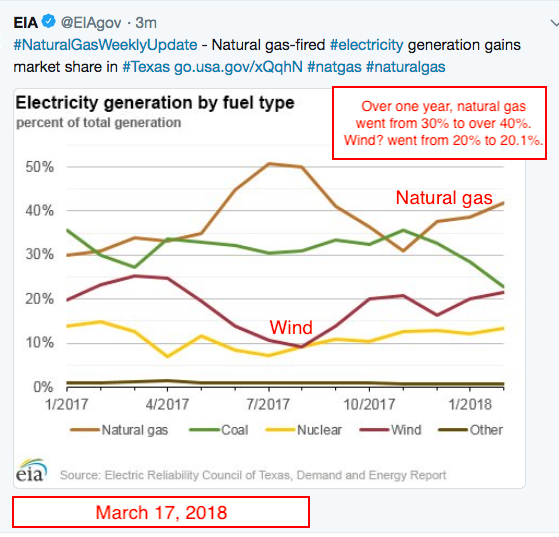 Global warming headlines over at iceagenow:


With U.S. NGL production hitting a record high of just over 4.0 MMb/d in the fourth quarter of 2017 and ethane production also reaching record volumes at 1.6 MMb/d, the price for ethane has remained stuck at about 25 c/gal — where it’s been for the past two years, even though prices for other NGLs are up over the same period.

The combination of roaring high-ethane-content Permian and SCOOP/STACK NGL volumes, coupled with steam cracker outages and construction delays due to Hurricane Harvey, have landed us here. So where do we expect the ethane market to go now as incremental cracker and export demand ramp up in 2018 and 2019? Today, we continue a series on our updated NGL market forecast, highlighting the NGL product whose market is going through the most changes: ethane.


Royal Dutch Shell, the world's biggest liquefied natural gas (LNG) trader, said on Thursday buyers of the fuel have not taken advantage of a market that favours them and have failed to extract better supply deals.

Steve Hill, executive vice president at Shell Energy, said this failure was damaging to all market participants as it prevented new supply from being developed.

"It's quite interesting in that you could argue that buyers haven't necessarily taken advantage of the buyer's market because buyers haven't done very many long-term deals," he told an industry seminar in Tokyo.

"I think what is our concern is that if deals aren't done and projects aren't sanctioned, eventually it won't be a buyers' market anymore because demand will grow and supply won't.

Hill said that a traditional model of switching back and forth between the buyer's market and the seller's market would not be helpful either way because that would lead to demand destruction in addition to projects not being developed on a regular schedule.