With all the success MDU had with oil and gas, the company is now going to see what it can do for its shareholders and customers by getting into the wind energy business. From the company's press release today:

Montana-Dakota was able to take advantage of the wind farm’s location, connecting to its transmission system in an area the company already provides electric service, further enhancing the company’s deliverability of power to its customers.

“It is so rewarding to see a project of this magnitude come together to provide our customers with a low-cost source of power,” said Nicole Kivisto, president and CEO of Montana-Dakota. “We could not have finished this project in a timely manner without the dedicated work of our employees, ALLETE Clean Energy’s construction management and the construction provided by Wanzek Construction and Nordex. It was a great partnership.”

"So rewarding." Sort of like the Bakken was "so rewarding" for MDU/Fidelity.

"Low-cost source of power." The earlier figure was $300 million. $220 million (in today's press release) / 108 MW = $2 million / MW. Less than the $7 million Minnesotans pay / MW at their airports, but much more expensive than natural gas  ($750,000 / MW). And these intermittent projects require natural gas / coal back-up anyway, and more miles of transmission lines. Whatever. It's an old story.

With this "low-cost source of power" and wind being completely free in North Dakota -- in fact, it's better than free; wind provides tax credits that are substantial -- MDU customers should expect to see their utility bills drop.


“We are helpless and not being able to do anything against this deliberate destruction to the oil installations” in Es Sider and the nearby Ras Lanuf oil terminals, NOC said. “National Oil Corporation urges all faithful and honorable people of this homeland to hurry to rescue what is left from our resources before it is too late.”

Libya, with Africa’s largest oil reserves, pumped about 1.6 million barrels a day of crude before the 2011 rebellion that ended Moammar Al Qaddafi’s 42-year rule. It’s now the smallest producer in the Organization of Petroleum Exporting Countries, producing 370,000 barrels a day in December.


RBN Energy: incredibly good article today on the WTI/Brent spread, contango/backwardization, the price of WTI going forward, and the future of US crude oil exports.

Platts wraps up the top five oil and gas stories for 2015:

Both of these stories appeared recently in The New York Times:
The first article could probably have been written every year for the past 50 years. One wonders if ObamaCare missed the low-hanging fruit.

From The New York Times yesterday: 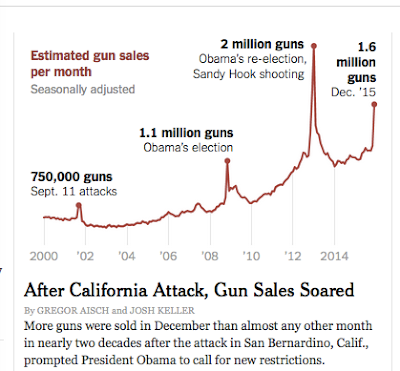 The "gun control" issue is nothing more than a fund raising scheme.

The Supreme Court has ruled that "background checks" and laws to prevent some folks from owning firearms are not in violation of the 2nd Amendment. With the technology available, background checks could be accomplished in less than three minutes by anyone. The fact that Congress has not authorized such "apps" suggests to me that Congress sees advantages in preventing the development of such "apps."

Whether background checks will make any difference or not is another story, but I think most folks agree that some folks probably shouldn't have guns, for example, inmates of federal prisons, and from there, one can expand the list to one's heart's content.

What goes around, comes around. One of my favorite movies is The Usual Suspects. I've watched it a dozen times -- most recently, last week -- and I never grow tired of it. Last night while surfing YouTube I see that the movie is on "Mojo's" list of the top ten movies that have to be seen twice -- or more in the case of Mulholland Drive, also on the list.

Now today, of all things, The Usual Suspects is featured over at The [London] Guardian. Three excerpts from the great article:


Gramercy, the distributor, had no idea what they had. The film was only shown in about 900 cinemas and, in terms of box office, only did about $60m. But it soon became clear we had a phenomenon on our hands. The Usual Suspects was on hundreds of Top 10 lists and, after winning two Oscars in 1996, became a video hit and a cult classic. Bill Clinton was a huge fan, because Chelsea loved it. He kept a copy on Air Force One.

When you’re in a thriller, you have to know the rules – then forget them and just react to what’s happening. There’s a scene where a thug flicks a cigarette and it hits McManus right in the eye. That wasn’t planned. And in the lineup, a policeman says to Hockney: “We can put you in Queens on the night of the hijacking.” He replies: “Really? I live in Queens. Did you put that together yourself, Einstein?” All improvised.

It’s amazing the effect the film still has. Even people who have seen it five or six times say to me: “I know who did it, but I still get a surprise.” I was filming in New York last year and this guy came up to me and introduced his friend, who was blind. The blind guy started to recite all the dialogue from the film. I said: “You know the lines better than we did.” And his friend said: “That was the last film he saw before he went blind.”