Note: Most of this is written on a hunch, based on limited data.

But I'm going to post it pretty much un-edited and then clear it up later.

Interestingly, most of this was covered about a month ago, and then with an update, one day later.

I don't plan on re-posting / repeating all that, but if you have an interest in the Bakken, this is a very, very important set of notes. Consider this post, the third of three, giving us a "classic trilogy."

A huge "thank you" to the reader who noted this.


Rolf 1 produced 29,000 bbls this month, another significant jump in production. They are also taking out a lot more water, over 150,000 bbls. over the last 3 months compared to about 2,300 bbls in a comparable drilling period last year.


I replied (for newbies, and perhaps all readers, be sure to look at the graphic at the linked posts above, which I have reproduced below):


Wow, this is going to be an incredible story to post when it's all said and done.

It's going to take quite a bit of time to post.

Of the ten CLR wells to the north (alluded to above); my hunch, based on their names, six will run north (five will be Springfield wells, and run directly north; the sixth will be a(n) Helena well and will be a line well. The four other CLR wells will be Rolf wells and will run south, parallel along Rolf 1. 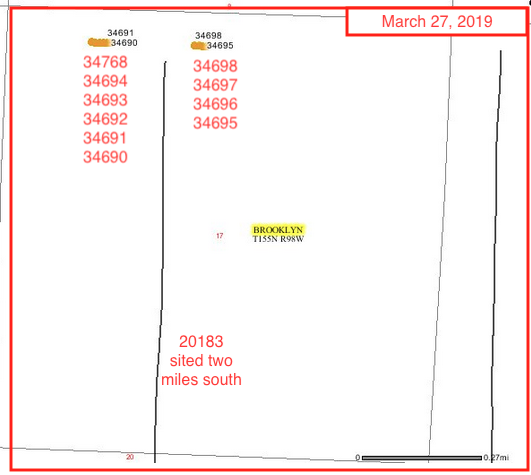 Other wells in the graphic: (see this post also; they have all been fracked):
Finally, on another note, the reader added:


Also two dry wells in Brooklyn Township, a Gjorven 7PA and Gjorven Federal 6PA. They are vertical bores only and listed as stratigraphic wells. I understand they are checking the formations but I would have thought Brooklyn was pretty well mapped.

I'll talk about this in another post later.
Posted by Bruce Oksol at 1:53 PM