This story has been posted numerous times on the blog in the past few months: the incredible build-out of the LNG export industry along the Texas - Louisiana gulf coast. Now, a short summary, a story brought over to Investor Village:


NG export projects planned for Texas' coast could have a total economic impact of about $145 billion of dollars and create thousands of jobs if approved by federal regulators, according to an industry group courting support for the proposed ventures.

Texans for Natural Gas said in a report that seven LNG export projects proposed or under construction in the state could raise $20 billion or more in tax revenue, create more than 135,000 jobs and have a total economic impact of roughly $145 billion. In addition to regional benefits, projects like the Freeport LNG export expansion could slightly reduce the U.S. trade deficit, the group said.

Roughly a third of U.S. LNG export projects are planned for Texas, which along with Louisiana has a natural gas pipeline network that can feed liquefaction and export terminals along the Gulf Coast. Freeport LNG Development LP's Freeport and Cheniere Energy Inc.'s Corpus Christi LNG export projects are both under construction, and the Exxon Mobil Corp.-linked Golden Pass project recently received the last of its major regulatory permits. Three export projects for Brownsville, Texas, are in review at the Federal Energy Regulatory Commission, as is the Port Arthur LNG export terminal proposed to be constructed along the Sabine-Neches Waterway.


Original Post
Crayola will be phasing out "dandelion yellow" this year. I bought several 24-count Crayola boxes as an investment since these will probably become priceless once "dandelion yellow" is completely phased out. See image below of current 2-pack available from Amazon.

At the time of the announcement, Crayola did not say what color was going to replace "dandelion yellow." They have now made the announcement that it will be shade of blue but the actual color has not yet been named.

There were a flurry of stories yesterday about this new blue crayon. From USA Today: Crayola's newest crayon color is a shade of blue that was just discovered.


A brilliant blue color, discovered accidentally by Oregon State University chemists, will soon be the newest addition to Crayola’s box.

The crayon color, inspired by the blue pigment known as “YInMn” blue," is the replacement for the recently retired Dandelion crayon. The vibrant blue was discovered by Oregon State University chemists who were heating up chemicals in hopes of finding new materials that could be used in electronics. In what the university calls a "serendipitous discovery," one of the chemical mixes came out of the furnace a striking blue. The "YInMn” moniker comes from the elements that comprise it: yttrium, indium, manganese and oxygen.

“With the discovery of YInMn brand new pigment, who other than Crayola would be best to bring it to life?” said Leena Vadaketh, Crayola’s VP of Research & Development, North America.

Wiki, of course, has a more complete story.

The new crayon will arrive just in time for Christmas, 2017. It will get its new name after September, 2017, and the crayon will be available soon thereafter. 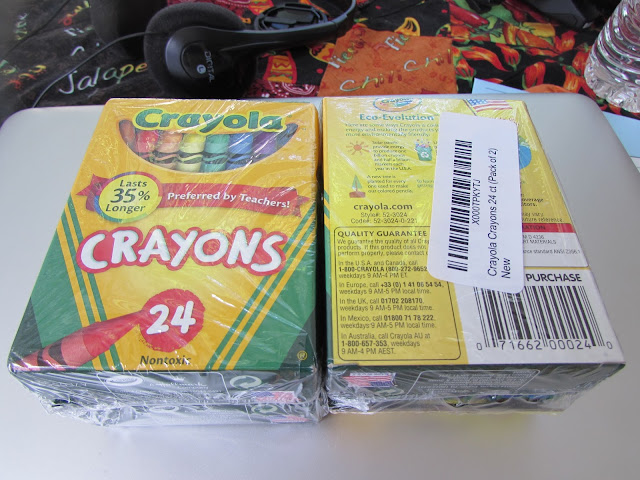