January 3, 2017: Washington Post  completely changes story; in-line with Trump -- Russian government hackers do not appear to have targeted Vermont utility say people close to investigation. This is their mea culpa:

January, 2, 2017: Obama, Hillary, DNC, are being played the fools. Now, The Washington Post will report story Tuesday that Russians had nothing to do with hacking Vermont utility.

January 2, 2017: Washington Post said to retract story, but editor only notes a change in the lede. The headline and the rest of the story appear to be unchanged. 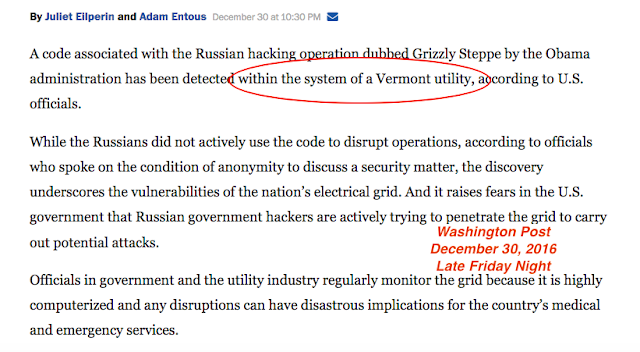 This was the headline associated with that story:

In fact, the "Russian malware" was "off-the-shelf malware," widely and easily available, and was found on an isolated laptop "used" by a Vermont utility employee (without further attribution/explanation) and not connected to the grid.

By Saturday morning, December 31, 2016, less than 10 hours after original Washington Post story, the story was found to be "fake news." The Washington Post changed the headline once facts came to light.

Why does this not surprise me.
Posted by Bruce Oksol at 9:15 AM