Disclaimer: in a long note like this there will be typographical and factual errors.

We're going to take a look at an EOG well, #17222. Look how far to the east it is, on the eastern fringe of the Bakken. There are very few wells to the east of these wells: 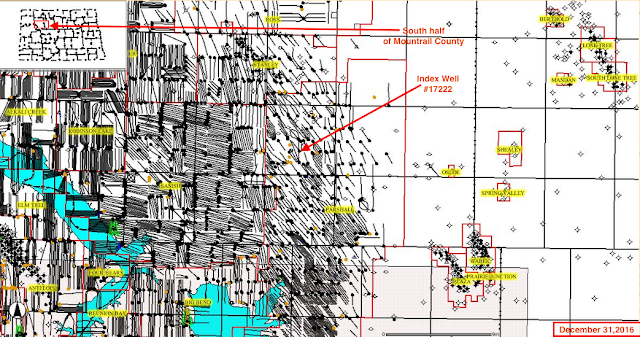 Now, drilling down, let's take a closer look at 17222, a short lateral, and then two long laterals that were drilled and completed later. Two wells that came very, very close to #17222 were fracked at a later date. #17222 was taken off-line while neighboring wells were taken off-line. Note the production profile of #17222 after it came back on line. The three wells are all middle Bakken wells; also note the names of these wells, paying attention to their chronologic designation (#18, #421, and #422): 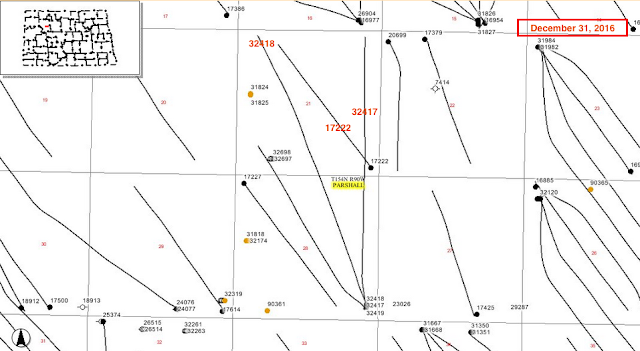 Pay attention to water production before and after this well was taken off-line while neighboring wells were fracked. This is most likely due to produced water being injected into #17222 when neighboring wells are being fracked -- see reason why this is done, below in bold.

And, then even more importantly, note the amount of natural gas produced before and after the well was taken off-line while neighboring wells were fracked.

From the sundry report dated February 22, 2016, prior to fracking neighboring wells:


EOG is currently executing a downspacing and infill drilling program. During this process the new infill wells are being hydraulically fractured offset to existing/producing wells. The existing wells in close proximity to the new infill wells are shut in during the drilling and completion process. Pressure pulses have been noted in the existing shut in wells during this process. Due to the pressure pulses, sand from the completions in the original wells can become dislodged and enter the wellbore. When sand enters the existing wellbore it can damage pumping equipment and/or plug the wellbore. When this occurs wellbore intervention is required to replace the damaged pumping equipment and may also require the wellbore to be cleaned out, both operations are costly and slow the process of returning offset wells to production.

As a mitigation measure, EOG is requesting approval to fill the existing wellbore with produced water from nearby producing wells. The fluid would increase the hydrostatic pressure in the existing well and assist in counter-acting the pressure pulses and sand influxes impacting the well from the drilling and completion process of the infill wells.

The fluid will be pumped at a very low surface pressure with a fluid pump. Pumping pressures are planned below 500 psi. At or before reaching 500 psi, pumping would cease keeping the pressure below fracture pressure.