A Decade-Old Petro-Hunt Well In The Charlson Is Back On Confidential -- Was Trending Toward 1.75 million Bbls Crude Oil Cumulative -- May 9, 2021

Note: in a long note like this there will be typographical and content errors. Facts and opinions will be interspersed; it is difficult to tell facts from opinions. I often see things that don't exist. I often get ahead of my headlights. If this is important to you go to the source. I am inappropriately exuberant about the Bakken. This is really exciting. For newbies, this page is chock full of amazing Bakken information, amazing information that can only be found on this blog. That's a great example of "fact" vs "opinion." LOL. The post is a bit disjointed because it was updated "on the fly" as new information was ascertained. But in the big scheme of things, the note still flows rather nicely.

The Bakken never fails to amaze me. I've said that many times on the blog.

But today, perhaps, is one of those most amazing days.

In fact, I've been waiting for this day for quite some time. It has happened before, but infrequently, but this might be the best example for newbies.

When I first started blogging about the Bakken, I mentioned that each well will go through many phases: initial drilling (with or without fracking); pump installation; re-works; neighboring fracks; small re-fracks; major re-fracks; re-entry targeting new formations; and so on.

Well, here we have it. This well is still on confidential so we won't know what Petro-Hunt is doing with this well until it comes off the confidential list. The only thing we might know for sure: it was not re-fracked based on FracFocus data.

If it was not re-fracked, and the two neighboring recently fracked wells were targeting the middle Bakken it's going to be fascinating to see the new production data: was there a halo effect?

Note that it was a Three Forks well; this would make it one of the earliest Three Forks in the Bakken and although I can't say for sure, it may not have been fracked when originally drilled.

More: there are two newer wells sited in this same section that drain the same general area but do not exactly parallel this older well. The new wells have these file numbers: #37151, #37152. They are also on confidential list but report a small amount of production suggesting they were fracked recently.

Because the well is on the confidential list we don't have the total production to date, but if I did the "math" correctly, this very short 640-acre-spaced well has had 1.7 million bbls of oil sold. Generally, the amount of oil sold is about the same as the amount of oil produced.

So, when it comes off the confidential list we will know.

Wow, wow, wow, stop the presses -- this was noted -- from the blog -- what a great blog -- this is worth the cost of the subscription. From an earlier post: 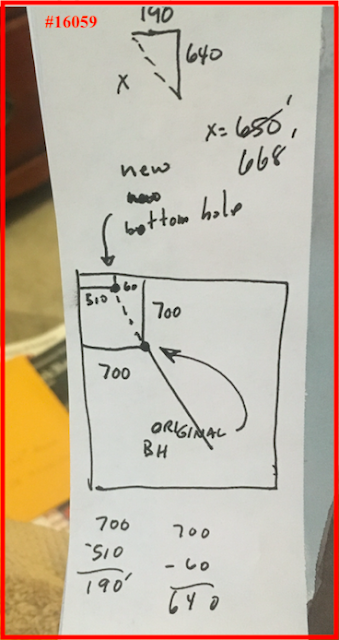 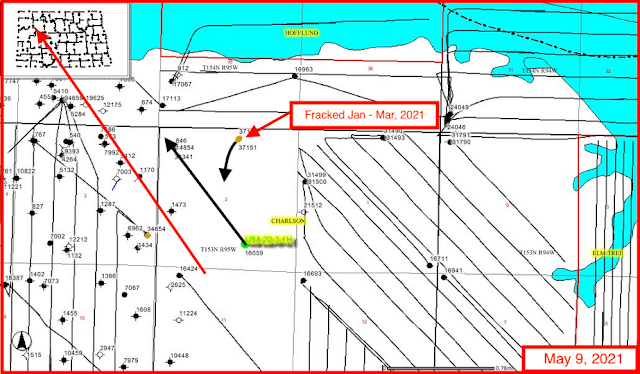