When in 1816, the Danish government went ahead with its plans for a national museum, responsibility for ordering the large collection of finds stored in the loft of Copenhagen's Trinitatis Church was given to Christian Jürgensen Thomsen .... Thomsen decided to try to bring some order to this vauge and diffuse idea of a public past ...

He began by grouping the articles according to composition and function. They included tools and weapons made of stone; weapons and other items ... made of bronze; articles made of iron....

With the exhibits sorted into these three basic groupings of stone, bronze, and iron, an exhibition opened to the public in the Trinitatis Church loft in 1819.

This was the first time the tripartite division of the past into Stone, Bronze, and Iron Ages was used.

In all my years of reading I never once thought to ask the question, how did this tripartite division begin? Very, very interesting.

Well into the fourth quarter and the Dallas Cowboys trail the Buffalo Bills by 19 points.

With less than six minutes to play, the CBS play-by-play folks are reminding viewers that the Buffalo Bills are trouncing "America's team" on national television, prime-time, Thanksgiving afternoon. Jerry Jones is probably aware of that. If last Sunday, four days ago, was embarrassing, not sure what word to use to describe this debacle.

Home game: it will be interesting to see how quickly the stadium empties so folks can get back home for Thanksgiving dessert.

Later: I felt somewhat guilty for being so hard on the Cowboys ... then I saw this: 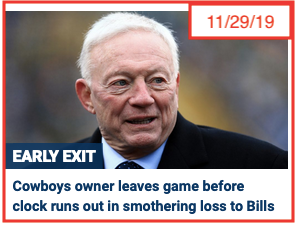