I can't get my head around understanding energy consumption required by "Bitcoin."

To put the following data in perspective, from google:

Luxembourg imports most of its energy. Luxembourg is the EU country with the second smallest forecast of renewables in 2020. Luxembourg has one of the highest emissions of carbon dioxide per person in Europe. According to IEA, the electricity use (gross production + imports – exports – transmission/distribution losses) in Luxembourg in 2008 was 7.7 TWh and population 0.49 million people.

So, now that I have kind of a range of electricity consumption in two European/British economies, I can move on.

This site monitors "Bitcoin" energy consumption. As usual, numbers may be rounded.


While renewables are an intermittent source of energy, Bitcoin miners have a constant energy requirement. A Bitcoin ASIC miner will, once turned on, not be switched off until it either breaks down or becomes unable to mine Bitcoin at a profit. Because of this, Bitcoin miners increase both the baseload demand on a grid, as well as the need for alternative (fossil-fuel based) energy sources to meet this demand when renewable energy production is low.

In the worst case scenario, the presence of Bitcoin miners may thus provide an incentive for the construction of new coal-based power plants, or reopening existing ones. This impact would be even harder to quantify.

Obviously comparing apples to oranges, but I find this chart quite stunning. This is the energy requirements for one Bitcoin transaction compared with energy transactions for 100,000 credit card transactions. 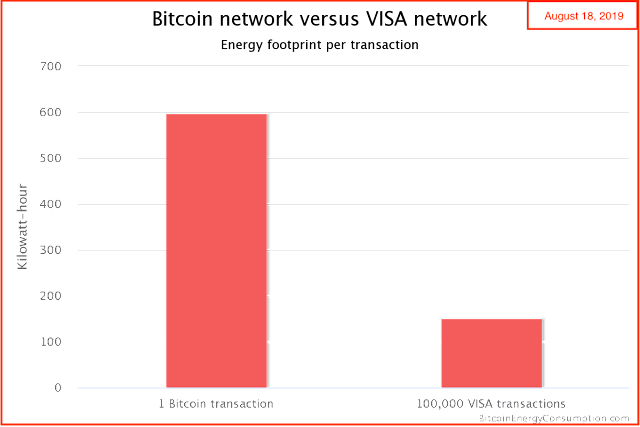 Meanwhile, folks are worried about flaring as an environmental concern.
Posted by Bruce Oksol at 12:53 PM