Idle Rambling: Where We Will Be In 2020 -- May 31, 2016; China, Japan Will Compete With Prince Salman For Refined Exports; Look At Australian, Asian Demand

A reader sent in a nice link on "how low oil prices are easing the glut" with a lookback of the past few years. I've added the link at this post because it seems to fit pretty well here.

Big picture: with regard to the oil and gas industry, I think we are in a "valley" of inactivity, with minor ebb and flow among the upstream, midstream, and downstream sectors. We will be in this valley for about two years. It will take all the "energy" I have to remain interested in following the story, but if I quit for even a day, I start to lose track of what is going on. Even in a "valley" of inactivity, there is enough stuff going on that that behooves folks to follow it, if for no other reason than to try to read the tea leaves.

Less than five years from now, in 2020, the excitement and activity in the oil and gas sector will be at levels I have seen only a few times in my lifetime. The only question is whether "we" get to that level of activity through slow and steady progress, or whether we see some shocks to the system, resulting in short term spikes, taking us to this new level of activity.

My hunch is that we reach the new level of activity in 2020 with sharp spikes upward. Probably in 2018.


Update: Bloomberg has a long, long article on Saudi financing US debt through Treasury bonds going back to Richard M. Nixon. This is one more reason why I think Saudi's Supreme Council will be hesitant to go through with the IPO: the kingdom is going to have to divulge a lot of information in exchange for a few billion dollars.

Prince Salman's Vision 2030 includes building more refineries in an attempt to diversify Saudi Aramaco which is predominantly an upstream company. It looks like Prince Salman will have some competition. It appears China is already beating him at his own game. This also explains why China has been such a huge importer of oil over the past few years. China may be a "Communist" country but it sure acts like a western company when it comes to oil and gas: 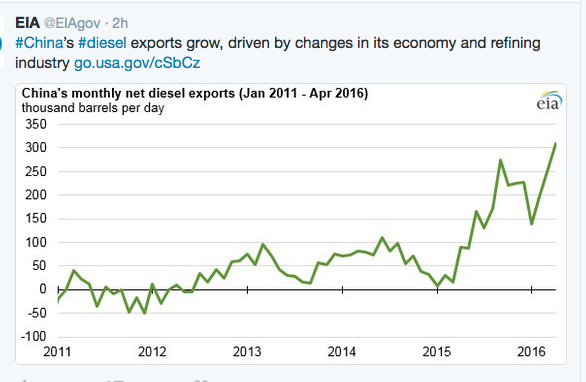 Meanwhile, it's being reported that Japan's import of Saudi Arabian crude oil hit a new record in April: 1.42 million bopd.

In addition, Japan will be exporting refined products at new levels.


Japan's largest refiner, JX Nippon Oil & Energy, plans to process 769,452 bopd of crude oil in June for the domestic market, down 6% from a year ago.

But JX plans to export an all-time high of 220,143 b/d of oil products in June, mainly to Asia and Australia, up 72% from a year ago amid supportive overseas demand.

JX's monthly oil product exports will rise to more than 210,000 bopd for the first time next month. The boost in exports comes after JX had said on April 27 that it will start exporting gasoil from its 145,000 bopd Sendai refinery in May, following the start of gasoline exports from the Mizushima plant, which has a combined refining capacity of 380,200 bopd, in April.