There are two big events happening this week in North Dakota. The most important "event" will be the release of the monthly (June) NDIC "Director's Cut."

I forget the second event ... oh, yes, that's it: the president will be golfing at the Links of North Dakota visiting Standing Rock Indian Reservation where he will join Ms Elizabeth Warren (in spirit if not physically) as an honorary Native American. (Ms Warren is a genuine Native American, just for the record.)

The monthly "Director's Cut" generally comes out on/about the 15th of the month. It seemed like it was always coming out on the 15th, and then the past few weeks it came out as early as the 13th. I have never seen it come out on the 12th, and if it has ever come out after the 16th, I am not aware.

This month's "Director's Cut" could be quite an "event." If, in fact, North Dakota goes over the one-million-bopd milestone that story will eclipse (almost) everything else. I suppose an exception would be a visual sighting of a Williston dustball and then the Dickinson Press would run that as their headline story.

So, the question is this. Supposing (or not supposing) that North Dakota hits that milestone, one-million-bopd, will the Director's Cut come out on Friday, while the president of the United States (POTUS) is visiting Standing Rock Indian Reservation?

The poll is posted.

For newbies: the Director's Cut provides data for the month ending about six weeks earlier. So the June report will have the April data. It is established beyond a shadow of a doubt that the roughnecks, roustabouts, and truck drivers were capable of getting "us" to the one-million-bopd milestone in April. If the milestone was not reached in April, it was due to events beyond any ordinary man's control, even beyond that of Mr Lynn Helms', and should be declared a force majeure, by a lawyer trained in oil law. Had the frosty hands of Mother Nature not interfered with the grand plans of several oil men, the milestone would have been reached in January, 2014.

The following is not the official route that will be undertaken by the president when he visits North Dakota. It is presented for illustrative purposes only. No one should make plans (or change plans) based on this illustration. 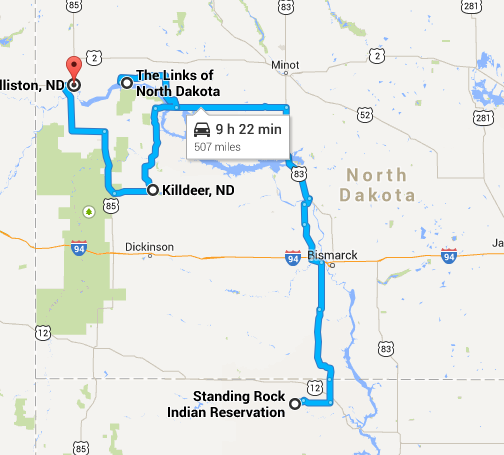 Williston is the city for which the Williston Oil Basin was named.

Killdeer is the city that Jim Cramer of CNBC fame has visited.

I assume the estimated time for travel is based on expected road conditions at this time of year and posted speed limits. Traveling time will be much reduced if traveling in a high-speed SUV motorcade. And yes, that's where Google places "Standing Rock Indian Reservation."

Since SRIR straddles the North Dakota/South Dakota border, one could actually poll readers on which side of the border the President will actually stand. Perhaps he could stand in one state, and have the teleprompter in the other state. That would be more fair.
Posted by Bruce Oksol at 7:17 PM