February 1, 2015: note the unusual production profile for these two wells at this post.

A reader brought this to my attention the other day. Look at these two wells:
These are middle Bakken wells.

Look at the jump in production, as just one story line. One has to assume the frack occurred late in the month of March.

There are a number of things to learn from the frack report, but the sundry forms are not yet part of the NDIC file.

But none of that is the BIG story regarding these two wells. 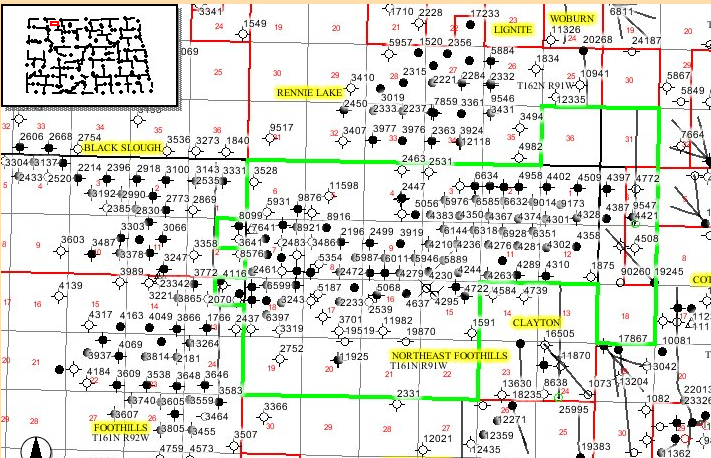 One well is located in Northeast Foothills oil field and the other in Clayton oil field, right next to each other. In the overview map, one can see (perhaps just barely, the little red rectangle) that the fields are in the far north edge of the North Dakota Bakken. From everything I've read, and what the reader noted, middle Bakken wells as good as these wells might be were not expected to found this far north. It was expected that Three Forks wells would make the news here, not middle Bakken wells.

It's also interesting that it was Cornerstone who drilled these wells, not "big names" like EOG, Hess, KOG, or WLL.

A lot more needs to be sorted out, which will occur over time.

For newbies: all those singular black dots without horizontal laterals are "old" Madison wells, many (most?) of which are still active.
Posted by Bruce Oksol at 11:32 PM