Because no one else is reporting it (except Fox Business which "blogger app" won't link), I will post this story again, but as a stand-alone post.


Making America great again. This story is being reported at Fox Business (unable to link). Look at the amount of American money flowing back into America. Before I post the graphic, here's the lede:

Despite President Trump's tit-for-tat trade barbs, America’s CEOs are not wasting anytime in taking advantage of his tax reform plan. Over $300 billion was repatriated to the U.S. in the first quarter, according to the Bureau of Economic Analysis (BEA) -- the most on record.

“U.S. firms that used to build their factories overseas in order to avoid U.S. taxes, they stopped in their tracks because of the tax bill, they are bringing all the money home,” said Kevin Hassett, chair of the president's Council of Economic Advisers, during an interview on FOX Business’ Varney & Co. in June. 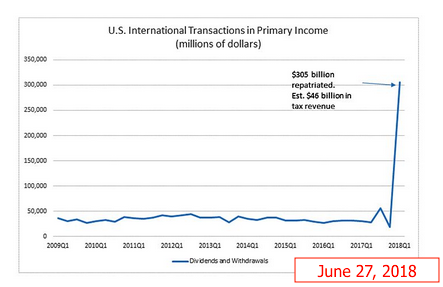 Now the comments from the reader who sent me the link:


The media is burying this story - virtually unreported. And even this article makes light of the ripple effect. $300 billion moved back to the USA in the first quarter of 2018.

That's ~ $1000 per man/woman and child in MAGA land. [In all fairness, the Dems, particularly their leader, Nancy Pelosi, suggests that to Americans, $1,000 is "peanuts."]

Free advice, and worth every penny.... I think the market is going to go gangbusters. (The Dow has retained a ~30% gain since the day Trump was elected. I think that's the baseline - remarkable as that gain has been.)

Again, that huge surge -- straight up.