Screenshot from a reader: 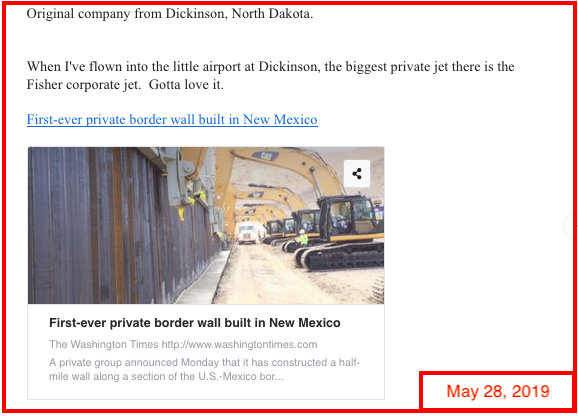 
The section was also built faster and, organizers say, likely more cheaply than the government has been able to manage in recent years.

Kris Kobach, a former secretary of state in Kansas and an informal immigration adviser to President Trump, says the New Mexico project has the president’s blessing and says local Border Patrol agents are eager to have the assistance.

Mr. Fisher has been in the news recently with Mr. Trump suggesting repeatedly and publicly that the government should consider his outfit for future border wall construction.

He was one of the contractors selected in 2017 to build wall prototypes in San Diego. None of those prototypes was deemed contract-worthy, and Congress has forbidden the Border Patrol from using any of those designs anyway.

More recently Mr. Fisher announced he could build 234 miles of fencing at $1.4 billion — or about $6 million per mile. That’s about a quarter of the cost of Mr. Trump’s current fencing, which goes off at about $25 million per mile.

The half-mile in New Mexico cost $8 million, but Mr. Kobach said because part of it involved building on Mount Cristo Rey and involved moving a lot of dirt, that’s more expensive than most mileage would be.


Born and raised on a farm in North Dakota, Gene Fisher was a problem solver with a knack for entrepreneurship and ingenuity. In 1952, at the age of just 24 years old, Fisher established Fisher Sand & Gravel Co. and laid the foundation for what would become one of the largest sand and gravel producers in the United States.

“Dad finished up with his high school education and people said ‘you became very successful without a college education,’” says Tommy Fisher, Gene’s son and the current president of Fisher Industries.

“He missed his high school picnic to screen gravel. Dad was always an entrepreneur.”

Gene, who died in 2013, realized that maintaining and repairing equipment was costly. Faced with a business challenge, he did what he was best at: solving problems.

This allowed him to be innovative when building custom and top-quality aggregate processing equipment.

“That was always Dad’s greatest move,” Tommy says of General Steel & Supply. “Crushing is an abusive sort of business. When you break rock, it’s hard on equipment. So when you have your own equipment and can build it a little more heavy duty, it makes you that much more successful.”

General Steel & Supply made it possible for Gene to design, fabricate, field-test, demonstrate, assemble and deliver custom equipment not just for Fisher Sand & Gravel, but also for aggregate companies throughout the industry.