Biggest news this morning: going to commercial break on  MSNBC "Morning Joe," the network plays the "Rush Limbaugh theme song." Washington Post suggests the Taiwan telephone call was strategic and carefully planned. If so, that is even more troubling.

DAPL: a quick run-through the morning headlines, it appears President Obama's decision to kill DAPL is as big a story nationally as the Taiwan telephone call is internationally. This pretty much is the star on Obama's Christmas Tree.

A butterfly flaps its wings. I'm not exactly sure which specific event culminated in #BlackLivesMatter; it started small -- as a hashtag, of all things -- and, up until the election, had grown into a fairly significant force, at least in some arenas. Similarly, Trump's attitude toward corporations moving plants overseas may be the equivalent of a butterfly flapping its wings. Oh, by the way, Schumer, Pelosi, Reid have all sung a verse from the same page as Trump: "corporate inversions." It is interesting that the Democratic triumvirate has not criticized Trump on the Carrier controversy. In fact, as I ramble, it's going to be interesting to watch any Congressman argue in support of US corporations moving plants offshore. Right, wrong, indifferent -- the most highly visible politician dissing Trump on Carrier was .... Sarah.

Jill: today we find out where Jill Stein takes the recall effort. Judge orders immediate start of Michigan recount to get it done by December 13, 2016.


On November 17, 2016, Tesoro Corp., the second-largest independent refiner in the Western U.S., announced an agreement to acquire Western Refining for an estimated $6.4 billion.

This is the second acquisition that Tesoro has made this year, following the purchase of the MDU Resources/Calumet Specialty Products Partners’ joint venture refinery in North Dakota. And—ironically, considering the name of the company Tesoro is buying—the Western Refining deal will expand Tesoro’s footprint further east than ever.

Today we evaluate the legacy assets of Tesoro and Western Refining and discuss how the two companies will likely fit together.

Jon Huntman: moderate Republican. Governor of Utah. Previously, US Ambassador to Singapore and China. Has served in the administrations of five US presidents.

Bob Gates at State and Mattis at Defense: MSNBC "Morning Joe" hosts practically fell all over themselves how great that duo would be -- Joe calls them the "Maris and Mantel" of the cabinet. Then they all agree that Trump is making some really, really inspired choices for his cabinet. (Of course, Sessions' name did not come up.) First consultant asked: agreed that Bob Gates would be perfect.

I certainly did not see this coming. Last night Dow futures were down a bit and that's what I expected. The Trump rally and the OPEC rally had cooled. The Italian Job. DAPL. The Fed. The Taiwanese telephone call.

Over at The Street: "tired Tesala" about to break down. A close beneath $!80 will put the stock at an 8-month low and for some analysts project a drop to $150, not far from the stock's year-to-date closing low of $143.

Just three stocks are responsible for almost half of the Dow's huge one-month rally: United Health, Goldman Sachs, and Caterpillar.  If Caterpillar is in that mix, that should be a very, very good sign for Trump's plan to make America great again.


Unlike the S&P 500 or the Russell 2000, the Dow is a price-weighted index, meaning that its performance is congruent to that of a portfolio that owns a single share of each company contained in the index.

If one owned such a portfolio, the move by a $223 share of Goldman Sachs would impact overall performance almost 10 times more than the same percentage-sized move in $29 Cisco (CSCO). (And that's why I like the Dow more than the others: if I had one share of GS and one share of CSCO and they both increased in value by 20% -- .... but again, like so many things with regard to investing I am wrong - wrong again. For investors, the S&P 500 and Russell 2000 way of doing things is more in line with how retail investors invest. One generally does not go to the market thinking to buy 100 shares of this and 100 shares of that. Rather, mom-and-pop retail investors go to the market with $1,000 to invest and look for the best way to invest that $1,000: perhaps $500 in GS and $500 in CSCO. If both companies rise 20%, the investments in both end up being the same.)

Carrier (Indiana, one thousand jobs) was crony capitalism; the GM bailout was not. -- MSNBC "Morning Joe." 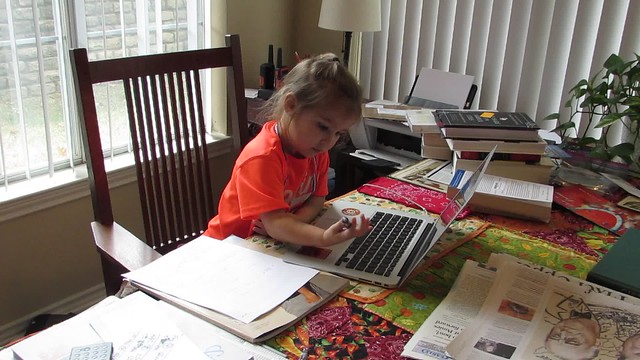 This is most interesting (for me).

One of my most treasured books; a coffee-table book:

But way more than that. I now understand the progression:
My notes on the book will be continued elsewhere.
Posted by Bruce Oksol at 5:17 AM