Breaking News:  Link here, although at the moment the site is down -- brought to my attention by a reader. This will be an interesting site to follow over the next several days. [It's up now. At 6:00 a.m. electricity rates were around $115/MWh. LMP: locational market pricing or location marketing price.]

June 4, 2019: from The Bismarck Tribune -- meet the lost Lewis chessmen worth $1 million. Clickbait. It's just a video preceded by a very, very long ad. Here's the "print" story over at BBC.

A medieval chess piece that was missing for almost 200 years had been unknowingly kept in a drawer by an Edinburgh family.

They had no idea that the object was one of the long-lost Lewis Chessmen - which could now fetch £1m at auction.

The chessmen were found on the Isle of Lewis in 1831 but the whereabouts of five pieces have remained a mystery.

The Edinburgh family's grandfather, an antiques dealer, had bought the chess piece for £5 in 1964.

These notes are only from the introduction of this book.

The book is about "modern chess" based on the Lewis chessmen. "Modern chess" arose somewhere among the Norse in the mid-12th century. The argument is who carved the Lewis chessman and/or where were they carved. The Lewis chessman were found in the early 1800s on a beach on the Isle of Lewis (hence the name of the chessmen) which is among the Hebrides, west Scotland. The argument seems to be whether the chessmen were carved in Iceland or in Trondheim, Norway; and, whether Margret the Adroit was the sculptor of most of the pieces.

The author ends the introduction stating that without a reopening of the dig at Skalholt we will never know the answer: carved in Skalholt, Iceland; or, carved in Trondheim, Norway.

The chessmen are made from walrus tusk from Greenland (99.999% agreed).

The book explains why the very famous match between Bobby Fischer and Boris Spassky in 1972 was held in Reykjavik, Iceland (page 16).

Today, while re-reading the book, I was struck (again) by the number of interesting words used by the author, some I was familiar with, some that were new to me. The words include:
The amount of trivia in this book is incredible. For example, this: "More medieval literature exists in Icelandic than in any other European language except Latin." -- p. 11

Over the years we've had several woks but for unknown reasons I haven't seen a wok in our small apartment here in north Texas. I finally got around to buying a new wok this past week -- on sale at local Albertson's - and did fried rice for the first time in a long time. 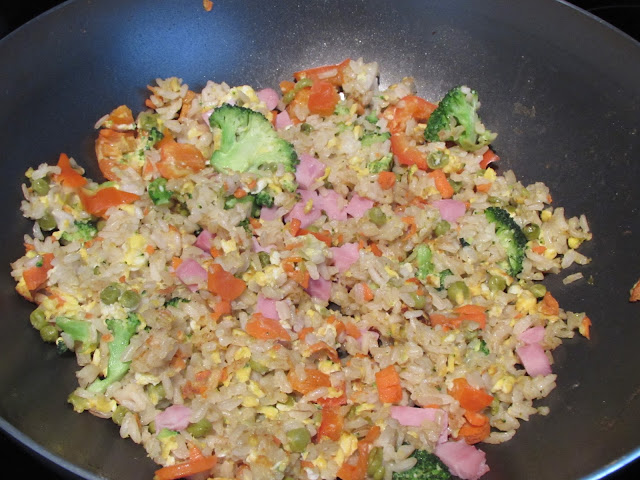