Also note: in a long note like this, done quickly, there will be typographical and factual errors. In addition, I may be seeing things that don't exist. Comments may be interspersed with hard data. If this information is important to you, go to the source. I am only posting it to help me understand the Bakken.

CLR will not be injecting diesel fuel during our hydraulic stimulation activities.

For newbies: "deepen" the existing lateral -- this does not mean CLR plans to "deepen" the horizontal vertically, but rather to "deepen" it by extending it. From the roughneck's perspective at the top of the hole, it appears the well is getting deeper; in fact, it might be better to say it's getting "longer" and CLR says that when they note the new bottom hole location.

Three wells of interest on the maps below:
The three-well pad:
Once these wells are drilled, fracked, or re-fracked, one is going to get a lot of new information regarding fracking in high-density / infill areas:
Also note, that CLR was given the opportunity to extend an existing horizontal lateral. The original horizontal was permitted to have the bottom hole location 548 feet from the north line; the horizontal will now be extended to within 200 feet of the north line -- it will be extended 336 feet. 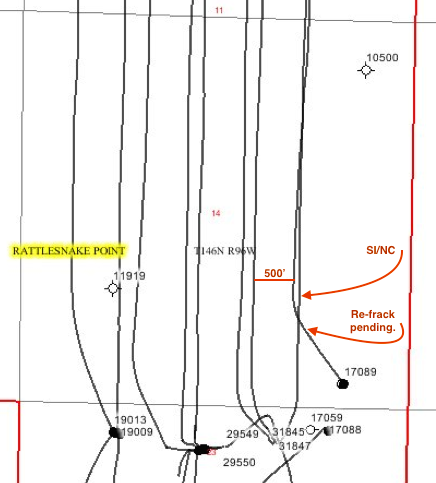 Note the multiple formations being targeted: 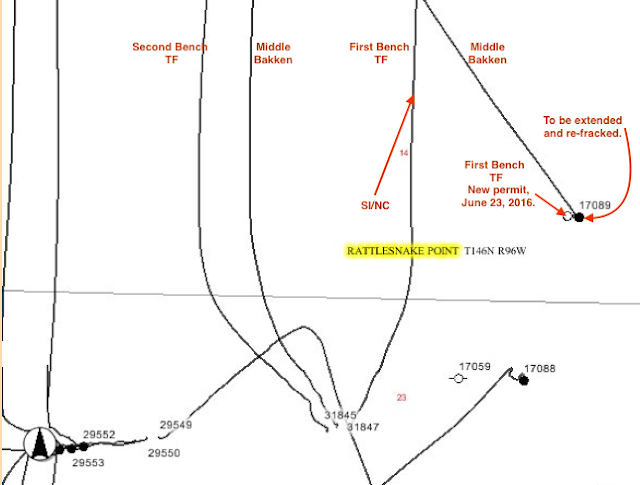