Normally after new Apple releases I hear a lot of "negative" chatter on social media. Not this time. The chatter on the new iPhone (four models) and the new chips in the computers has been nearly 100% positive. The only really negative chatter? Supply constraints are limiting orders and slowing delivery times. Nice problem to have, I suppose.

From techcrunch: the new MacBook Pro is powerful and fast, but it's the battery life that will blow you away.

Apple already has the students and the seniors. Now, Apple is going after the geeks and gamers.

Wow, I love all that alliteration. Purely accidental. Okay, contrived to some degree. 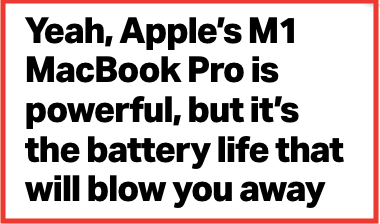 From the techcrunch link:

Apple has introduced three machines that use its new M1 system on a chip, based on over a decade’s worth of work designing its own processing units based on the ARM instructions set.

These machines are capable, assured and powerful, but their greatest advancements come in the performance per watt category.

I personally tested the 13” M1 MacBook Pro and after extensive testing, it’s clear that this machine eclipses some of the most powerful Mac portables ever made in performance while simultaneously delivering 2x-3x the battery life at a minimum.

These results are astounding, but they’re the product of that long early game that Apple has played with the A-series processors.

Beginning in earnest in 2008 with the acquisition of PA Semiconductor, Apple has been working its way towards unraveling the features and capabilities of its devices from the product roadmaps of processor manufacturers.

The M1 MacBook Pro runs smoothly, launching apps so quickly that they’re often open before your cursor leaves your dock.

Video editing and rendering is super performant, only falling behind older machines when it leverages the GPU heavily. And even then only with powerful dedicated cards like the 5500M or VEGA II. Compiling projects like WebKit produce better build times than nearly any machine (hell, the M1 Mac Mini beats the Mac Pro by a few seconds).

And it does it while using a fraction of the power.

This thing works like an iPad. That’s the best way I can describe it succinctly.

One illustration I have been using to describe what this will feel like to a user of current MacBooks is that of chronic pain. If you’ve ever dealt with ongoing pain from a condition or injury, and then had it be alleviated by medication, therapy or surgery, you know how the sudden relief feels. You’ve been carrying the load so long you didn’t know how heavy it was. That’s what moving to this M1 MacBook feels like after using other Macs.

That comparison to the iPad caught me off-guard. I thought I was the only one that noticed that. I routinely "work" with the desktop iMac, the laptop MacBook Air, the iPad, and the iPhone.

Of the four, it's the iPad that is fastest, smoothest, and best machine for surfing the internet. The iPad, without an attached keyboard, does not meet my needs for blogging. For blogging I need the laptop or the desktop.

Did you see that comment regarding battery life? " ... while simultaneously delivering 2x-3x the battery life at a minimum." That's quite impressive.