Drenched: the Bakken is getting drenched. Folks may recognize "Twin Buttes" and "Dunn." In addition, the Missouri River system is already at / near flood levels and the US Army Corps of Engineers has increased release at Garrison Dam from around 50,000 cubic feet/second to over 60,000 cubic feet/second (at this link, Garrison Dam water release, one can get daily release numbers (a PDF will likely download on your desktop). Thousands still without power after overnight storms. I imagine this could be creating havoc in the oil fields. 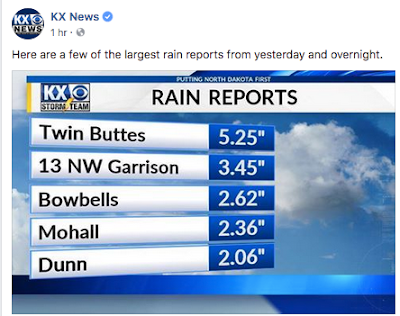 
The new rules limit flaring to one year after first production from a well, after which time producers have to do one of the following:  connect the well to a gas gathering pipeline, cap it, or link it to an electrical generator or a compression or liquefaction system that consumes at least 75% of the gas onsite. The NDIC also set targets for reducing the share of produced gas that is burned off statewide: flaring no more than 26% of total gas production by November 2014, 23% by January 2015, 20% by April 2016, 15% by November 2016, 12% by November 2018 and 9% by November 2020.


Based on the current schedule, these two will bring overall Bakken processing capacity up to nearly 2.6 Bcf/d by year’s end. Additionally, there are plans for three more expansions in 2019 that would bring processing up by another 500 MMcf/d or so to more than 3.0 Bcf/d total.


Considering all the midstream constraints, the bottom line is that there is a gas problem in Bakken oil country, and it’s making it all the more difficult for producers and processors to comply with North Dakota’s gas capture plan. That’s prompted the NDIC to put forth revised guidance, based on recommendations from an industry task force, in hopes that it will get the industry through what’s looking increasingly like untenable constraints.

The commission didn’t change the targets, per se, but rather expanded the allowances and temporary exemptions for how and when flared volumes are counted against the limits/targets. For instance, the revised plan increases the number of days operators can exclude flared volumes during the initial production phase to the first 60 days, compared to 14 days previously. Among other allowances, operators also can now exclude volumes flared during a force majeure event, if they are from wells that were already drilled and completed as of the date of the event. Operators would also be able to offset flaring volumes by accumulating credits for using liquefied natural gas (LNG) or compressed natural gas (CNG), or for exceeding the gas capture goal within the most recent six months.

In effect, these changes would allow producers to be in compliance with the gas capture targets even if the actual flaring volumes exceed the limits, which would mean that oil production could continue growing even if sold gas production doesn’t.