From oilprice.com, all in 24 hours: 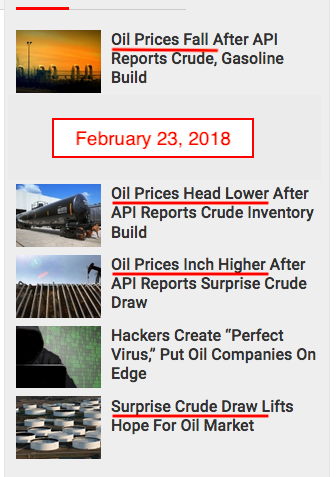 Note: I did not look at many or listen to many presentations but the few I did ...

Turkey becoming unhinged: Turkey's navy threatens to sink Eni drilling ship offshore Cyprus. Go ahead, do it. And kiss your aspirations to be a full member in the EU goodbye. Wow, what idiots. (Yes, I know there's a bit more to this. But not much.)

Wow, Mexico to emulate Venezuela? The front runner in the Mexican presidential election?
A "leftist" candidate who plans to "scrupulously review" his countries oil sector policies. Wants to discontinue crude oil exports to the US. Wow.  From wiki:


As in the 2006 and 2012 elections, the 2018 campaign has featured numerous accusations and attack ads directed at the leftist frontrunner candidate Andrés Manuel López Obrador (AMLO), who will be contesting the elections with the support of his party MORENA ("Movimiento de Regeneración Nacional", "National Regeneration Movement").

A Red Scare-like campaign has been used by the PRI and PAN candidates to convince voters that an AMLO victory would turn Mexico into "another Venezuela". In a speech, PRI president Ochoa Reza stated that "if the people from MORENA like Venezuela so much, they should just go and live in there".

The wall: come 2021, even the Californians will want that wall. See previous note above.