Gasoline demand: although the EIA site says the data was released July 8,2015, the graph from last week has not been updated. I use the graph at the very bottom of the page. I don't know if the data itself has been updated. It says finished motor gasoline was 9.532 million bbls/day in the week ending 7/3/15. That looks to be identical to what was reported last week, but I did not save that exact number, just posting the graph.

I always thought the the graph and the spreadsheet matched, but obviously they don't; this is today's screen shot which the EIA said was released on July 8, 2015: 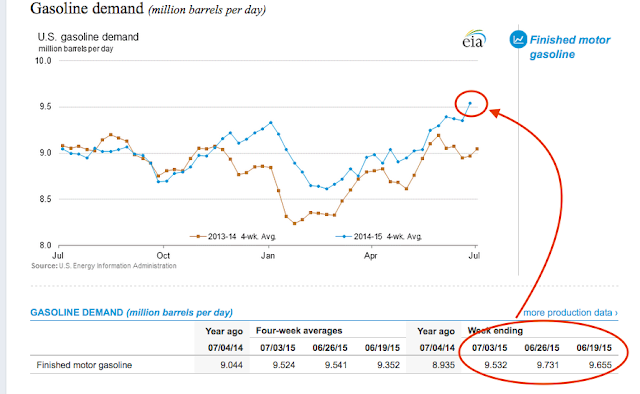 [Note, July 16, 2015: I just noticed a mistake. I circled the "week ending" numbers but the graph is showing the 4-week average; however the graph is still not updated from the week before.]

I am obviously misreading something; I can't explain it. More to follow I'm sure. Maybe the EIA had the same technical glitch that the NYSE, United Airlines, Wall Street Journal and MDU had yesterday.
Posted by Bruce Oksol at 10:13 AM