Natural gas fill rate: 69 (pretty low). Only 29 Bcf above the 5-year average. If it's a normal winter, everything will be fine. The big story is as fast as the industry produces natural gas, it's all consumed. Americans apparently can't get enough of it, as they switch from coal to natural gas. In the East Region, stocks were 98 Bcf below the 5-year average following net injections of 56 Bcf.

I don't think folks are aware of these three data points from the past week: 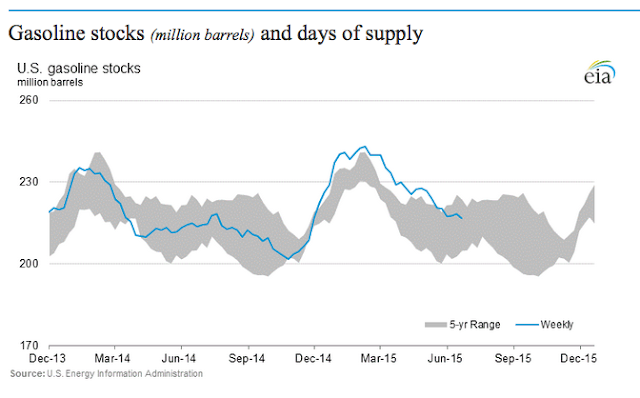 US producers continue to produce more than expected, refineries are working at full capacity, and gasoline stores are falling like a rock. Interesting, huh? But there's another story line. I'll come back to that later. First the graph on gasoline demand: holy mackeral: 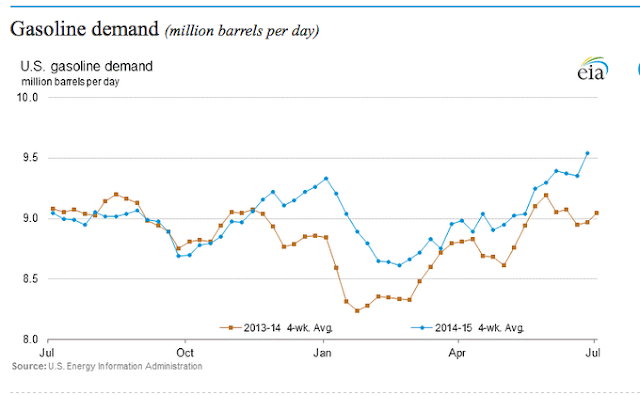 The graph below is slightly more interesting. It appears that not only is gasoline demand increasing (as expected in the summer) but the surge is increasing earlier in the driving season this year. It's subtle but the data tends to support that assertion: 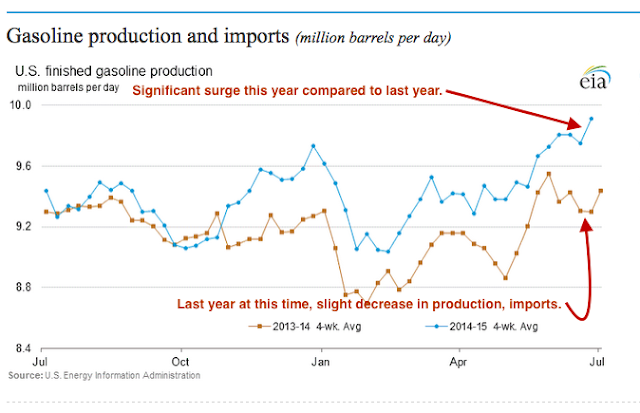 At the link, note also that ethanol production is dropping off very, very slightly, as expected. Folks have had it with ethanol. With motor vehicle fuel usage increasing, all things being equal, ethanol volume should also be increasing but it's decreasing. On top of everything else, I think folks forget that ethanol does not provide as good a mileage (MPG) as gasoline, or so I've been told.

I still think we're going to break a record for gasoline usage this August, 2015.

Flashback!  This was posted back in November, 2014. I still love it (the post). I will have to update it for our current California adventure.

I said this above: But there's another story line. I'll come back to that later. Again, here were the three data points:
Look at that first data point. Pundits forecast that crude oil stores would decline this past week; in fact, crude stores increased (in this environment, one might even say crude oil stores soared). So, what the story line? This: everybody thought US oil industry was dead, could not survive in this pricing environment. I am quite sure that producers are not increasing production to sell oil at a loss. Somehow, the operators are ekeing out a profit. Going down the food chain: