Back in the day, if I went to McDonald's and the tab came to $3.16, and all I had was a $5-bill and lots of change, I used to give the cashier the $5-bill and 16 cents in change. But about three years ago I started noticing that servers at McDonald's were confused when they got the 16 cents, and I usually still still got $1.84 back in change.

So, now I've given up. If the tab comes to $3.16, I just hand over the $5-bill and get all that change back. After five or six visits, I have enough change to pay the exact amount in pennies, nickels, dimes, and quarters.

Sometimes one just has to adjust.

From CNN, a link sent to me by a reader:


That makes Tesla worth more than Big 3 automakers GM, Ford, and Fiat Chrysler as well as Japan's Honda and Nissan and South Korea's Hyundai. Not bad for a company that still sells a fraction of the vehicles put out by its rivals.

Worldwide sales, monthly:
I don't know how CNN defines a fraction but let's see the percentage of just one of those:

For all the money VW and the others are throwing into EV development, they would be better off coming up with really, really fancy SUVs with tons of bells and whistles, starting with a free iPhone X for every driver; an iPhone 8 Plus for every passenger; and iPad movies for second row and third row. And lots more cup holders. 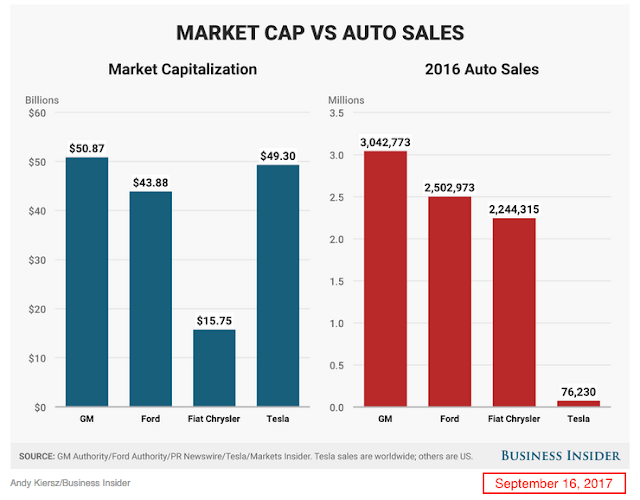