Random photo from the Bakken, sent to me by a reader, a couple of weeks ago: 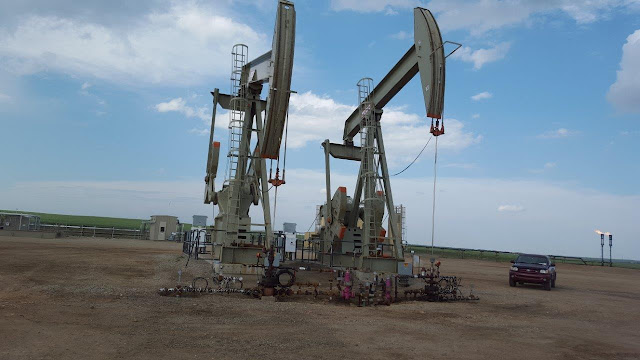 In addition, if folks want to see some photographs of an 18-well super,pad, look at the photos of the Hess EN-Jeffrey pad on the Jeffrey Ranch.

Tweeting now: Jack Kemp says California gasoline sales were +3.7% higher in April compared with same month a year earlier (state tax records). Comment: that was in April. I'm still looking for a record to be set in August, 2015, for US gasoline demand.

Winds hit speeds equal to class I hurricane this past week in North Dakota; no fracking during high winds and wind turbines, living up to their role as intermittent energy providers, were "off."

The interesting thing about the graph posted yesterday, this was not a comparison between wells drilled at the start of the boom and the most recent wells. This was a graph of wells drilled last year and those being drilled this year. I find the graph, in those terms, staggering.

How sad. Dentist from Minnesota kills beautiful lion in Africa.


The growth rate of U.S. health care spending over the next decade is likely climb faster than it has since the Great Recession, according new government projections published Tuesday. And as the growth rate creeps higher, by 2024 nearly 20 percent of spending in the U.S. economy — one dollar in every five — will be related to health care, up from 17.4 percent in 2013.

As it is, health care spending reached an estimated $3.1 trillion last year, or nearly $9,700 per person. That represents an increase of 5.5 percent, the first time since 2007 that spending growth has topped 5 percent.