I often make typographical and factual errors; if this information is important to you, go to the source, generally the NDIC.

Only 5% of North Dakota oil is coming from legacy conventional pools.

A 4.6% increase month-over-month (the daily bopd). I wouldn't be surprised if this is the last month in which we see month-over-month increases; if not this month, maybe one more month with a production record, and then after that, starting with the November, 2014, data, the production may start to drop (polar vortex in November, flaring rules, crude oil stabilization rules, slump in oil prices, new tribal chief, and I'm sure something else will pop up between then and now). We will see the November, 2014, data on/about February 15, 2015.

Disclaimer: this update is always done in haste; typographical errors are likely. This is for my use only. Others should go to the source.

Incidentally, it looks like the Red Queen is running faster and faster: 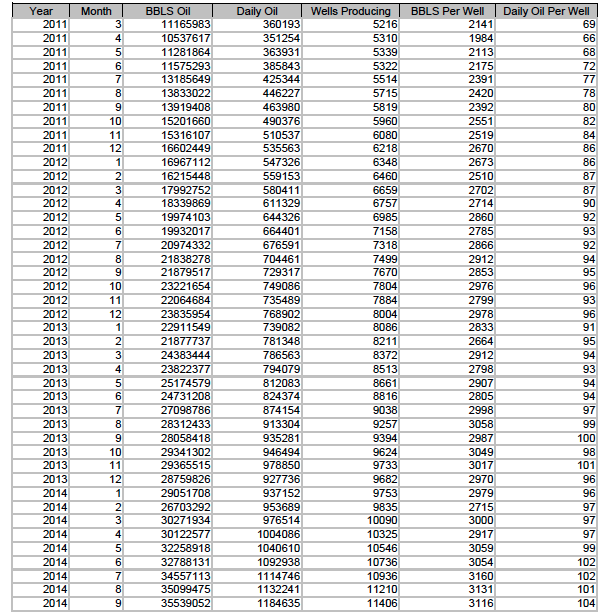 Back in 2011, four years into the Bakken boom, the average well in North Dakota was producing less than 70 bbls of oil per day. The most recent figures suggest the number of bopd is solidly above 100 bopd.

That looks like a 43% increase in the amount of oil being produced per well per day in North Dakota.

The Red Queen is running faster and faster, it appears.