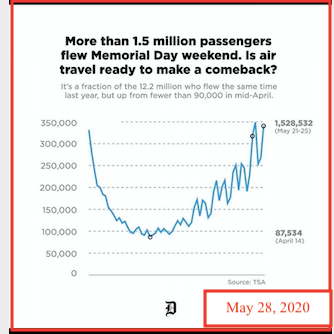 Wuhan flu: Minneapolis mayor asking protestors to maintain social distancing. It will be interesting to see if there is a surge of new cases in Minnesota two weeks from now. My hunch: no. Looters are wearing masks as recommended by the mayor, CDC.

Cuts: Russia, OPEC discussing extension of crude oil production cuts after July 1, 2020. Link over at Reuters. Many story lines in this one. Apparently: 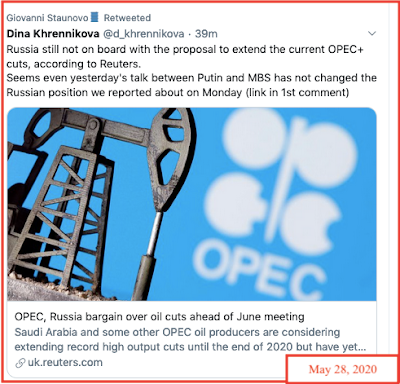 One well coming off confidential list today  -- Thursday, May 28 2020: 90 for the month; 140 for the quarter, 367 for the year:
RBN Energy: Corpus Christi's newest crude export terminals. Article archived here.


Through the second half of the 2010s, the Permian Basin’s crude oil supply trajectory was clear: up, up and up. From the start of 2015 to the end of last year, crude production in the world’s leading shale play increased by an amazing 3 MMb/d, from 1.7 MMb/d to 4.7 MMb/d. Three new pipelines with a combined capacity of more than 2 MMb/d were built to move a lot of those incremental barrels to Corpus Christi, which — thanks in part to newly developed storage and docks — has become the U.S.’s #1 port for crude exports in recent months. But Permian producers have trimmed their crude output by at least several hundred thousand barrels a day this spring in response to falling demand and low prices. Has the Permian been thrown off course, and if it has, what would that mean for marine terminals in Corpus? Today, we continue our series of Gulf Coast crude export facilities with a look at the three newest terminals along the Corpus Christi Ship Channel.