This is being reported at multiple sites. If you hit the Washington Post paywall, try the Independent Tribune. There are other ways to access the story.

In the first few chaotic weeks of the Paycheck Protection Program, federal officials and banks throughout the country struggled to get bailout funds to small businesses as layoffs and furloughs climbed into the tens of millions.

But there was one exception, a place where loans found their mark more quickly than any other: North Dakota.

Small businesses there secured more PPP funds, relative to the state’s workforce, than their competitors in any other state — more than $5,000 per private-sector worker as of May 8, according to a Washington Post analysis.

And North Dakota's "beat" was not by a small margin. A screenshot of as much as I could capture (the full table here): 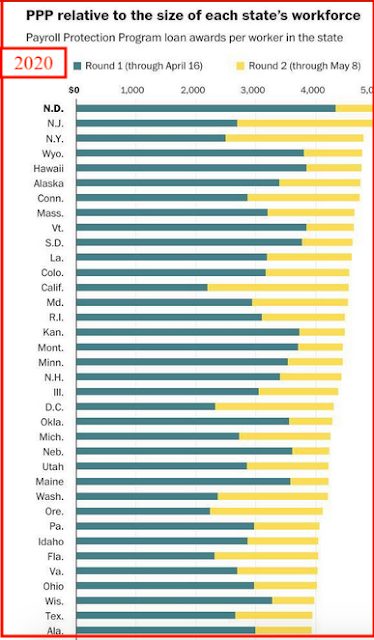 North Dakota was #1, it appears, in both rounds. NJ and NY took second and third by the end of the second round, but they really had to catch up after the first round. I assume governors Cuomo and Murphy were scrambling for ventilators and masks during the first round. Whatever.

More of the story here. It's so fun to read:

In the program’s troubled first round in particular, the state put business lenders in the rest of the country to shame. North Dakota small businesses appeared to have a significant advantage in administration and organization.

What’s their secret? Much credit goes to the century-old Bank of North Dakota, which — even before the PPP officially rolled out — coordinated and educated local bankers in weekly conference calls and flurries of calls and emails.

According Eric Hardmeyer, BND’s president and chief executive, BND connected the state’s small bankers with politicians and U.S. Small Business Administration officials and even bought some of their PPP loans to help spread out the cost and risk.

“They were really expeditious and efficient,” said Robert Hockett, a Cornell Law School professor and a veteran of the Federal Reserve Bank of New York. “There was no leakage — the sort of ridiculous fee-charging that tends to happen when you do it through larger banking entities.” He added later that because BND is a public institution, “it isn’t really designed to maximize revenue lines by finding as many places to assess fees or brokerage charges as possible.”