Making America Great -- This Is Just One Reason Why The Davis Refinery Is So Important, And Why I Love To Blog -- March 11, 2019

This is a big, big deal. Archived.


As Rigzone has reported, Meridian’s 49,500-barrel per day Davis Refinery in Belfield, ND, will qualify as a “Synthetic Minor Source” from an emissions perspective.

On February 11 of this year (2019), Meridian announced that it had struck a deal with a unit of Winkler Co. to build a 60,000-bpd full-conversion refinery in Winkler County, Texas, in the Permian’s Delaware Basin.

The Permian refinery will be similar to the North Dakota facility and will also be permitted as a Synthetic Minor Source, Meridian added. The company asserts that the Davis Refinery, which it expects to begin commercial operations in 2021, will be the first full-conversion refinery to be designated in that manner. In a recent conversation with Rigzone, Meridian CEO William Prentice offered additional insights on the North Dakota and Texas projects.

See the linked article on for his perspective.

Learning to "get around" environmental regulations. 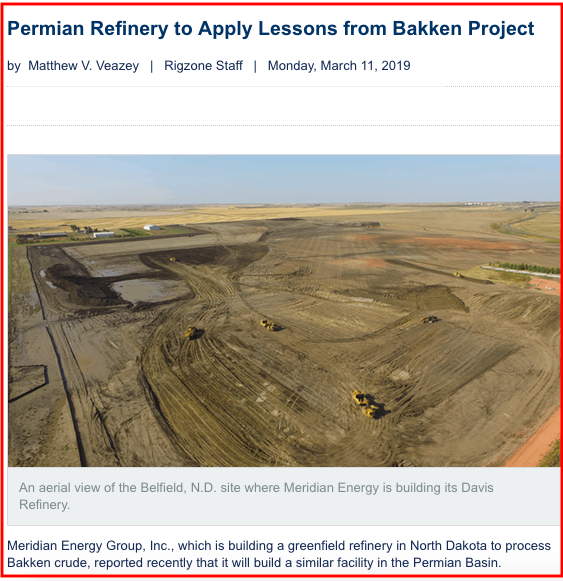